Traffic fatalities in 2021 increased by largest rate in history 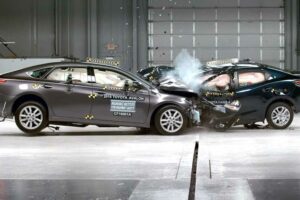 The number of people killed in car crashes in the U.S. increased by 10.5% from 2020 to 2021, representing the largest percentage increase in the history of crash fatality data keeping, the NHTSA disclosed in preliminary estimates on Tuesday. The NHTSA estimates 42,915 people died in motor vehicle crashes in 2021, the most since 2005. In 2020, there were 38,824 fatalities.

The increase is a continuing and concerning trend, even accounting for the pandemic when U.S. drivers logged far fewer miles than normal. In 2020, with less crowded roadways, there were more speed-related fatalities. Also, the NHTSA attributed 3,142 fatalities to distracted driving due to cell phone use, which was more than 8% of all fatalities.

The largest increases in 2021 were from multi-vehicle crashes and crashes in cities, which both increased 16%. Fatalities among older drivers, pedestrians, and those involving a large truck also experience double-digit increases. The NHTSA has not yet parsed the reasons for the crashes. All estimates are based on the Fatality Analysis Reporting System instituted in 1975 and used by all 50 states to report crash data.

Vehicle miles spiked last year, increasing 11.2% over 2020, and roughly the same number of people died on a per mile basis. More mileage led to more deaths. The fatality rate per 100 million vehicle miles traveled stayed nearly the same, with 1.33 fatalities in 2021 compared to 1.34 in 2020. Crashes at nighttime still made up the majority of fatalities at 23,116 people.

“This crisis on our roads is urgent and preventable,” said Dr. Steven Cliff, NHTSA’s deputy administrator.

The increases come despite more automakers equipping new vehicles with automatic emergency braking and other driver-assist systems meant to mitigate the incidence and effects of a crash. Twelve out of 20 automakers make the safety feature standard on 95% of new passenger cars sold.

An effective automatic emergency braking system prevents or mitigates impacts from rear-end collisions, and more sophisticated systems slow or stop cars from hitting objects peripherally, such as a child darting from between parked cars into a street or a car speeding through a perpendicular intersection.

The IIHS predicts the standard technology will prevent 42,000 crashes and cut in half the number of rear-end crashes by 2025.

Lawmakers are also addressing the spiking fatality rate. The NHTSA announced an investment of $6 billion over five years to encourage local efforts to reduce roadway crashes via its Safe Streets and Roads for All program. The program is part of the Bipartisan Infrastructure Law that encourages local governments to apply for grants to support infrastructure that cultivates roadway safety, ranging from adding turn lanes at intersections to transforming entire roadways.

“We face a crisis on America’s roadways that we must address together,” U.S. Transportation Secretary Pete Buttigieg said in a statement.