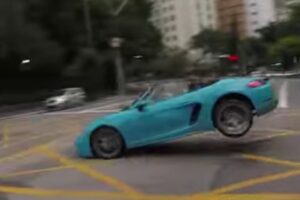 There’s a time and a place to enjoy the performance of a car like a Porsche 718 Boxster. And that isn’t in the middle of the day in a big city whose roads aren’t exactly in tip-top condition. This is the lesson learned in this short video from Instagram, recorded on a motorcyclist’s helmet camera in São Paulo, Brazil.

We can’t be sure exactly how fast the Boxster was approaching the junction seen in the clip, but it certainly looks brisk. In any case, the driver was clearly carrying too much speed for the state of the road, hitting a dip in the asphalt that launched the car in the air.

The landing is a nose-heavy one, with the front end scraping the ground and the rear wheels looking to be a good couple of feet in the air. The 718’s back end slides out just after all four wheels make it back down to earth, but thankfully the driver just about holds it together to prevent this little incident from getting any worse.

In the end, the driver has probably gotten away with little more than a scuffed front splitter, and some slightly dented pride having garnered five minutes of Internet infamy. Drive safe, folks.