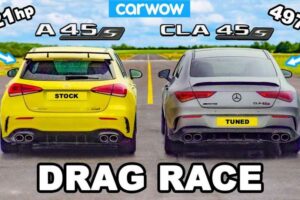 When extra power makes no difference.

We’ve seen the Mercedes-AMG A45 S against many different opponents on the drag strip. Sometimes it wins, and sometimes it doesn’t. But today’s race featuring the ultra-hot hatch has a slightly different purpose – to show what a simple ECU remap can do to an already very capable machine.

Carwow took a yellow A45 S and put it next to a tuned CLA 45 S. The latter has a new engine control software and pushes out – behold! – 490 horsepower (365 kilowatts) and 487 pound-feet (660 Newton-meters) of torque. And yes, there are no hardware modifications to the little 2.0-liter four-banger under the hood.

On paper, this probably looks like a waste of time. In stock form, the A45 S has 421 hp (314 kW) and 367 lb-ft (500 Nm) of torque, well below the numbers of the tuned CLA. But then, the track is wet and power is obviously not everything. Traction is the keyword here and it decides the standing-start drag race.

With so much extra power and an indecisive transmission, the remapped CLA struggles to channel its power to the road. In the first race, the A45 S takes a comfortable win thanks to its better traction. In the second run, we have the same winner, though this time around it’s a photo finish.

However, the upgraded CLA shows its full potential in the rolling race where it annihilates the yellow hot hatch. And if you want our two cents, this is the more important duel here as it shows that a set of better tires and nicer weather could do miracles with the performance sedan from Stuttgart. Just don’t drag race it when it rains.