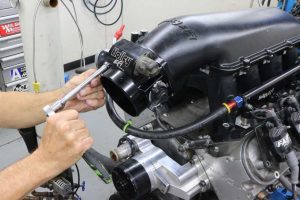 Intake manifolds are about more than how much air they move, and intake runner length can play a key role in how and where your engine makes its power.

For the last decade or so, enthusiasts have chosen the popular LS platform over not only the original small-block, but over most other competing engine families as well. Taking over for the original small-block Chevy, the LS had some big shoes to fill, but fill them it did. Although owners of the various generations of mouse motors might argue the merits of each, one thing they all have in common is confusion about the workings of an intake manifold. Not in a general sense, as the intake is designed to allow both air and fuel into the motor, but the specifics get cloudy when it comes time to upgrade from the factory piece. Although our intake manifold comparison was on a 6.0L LS application, the general guidelines offered by the results actually apply to all intakes, regardless of the engine family. In fact, the results even carry over when you apply boost to the equation!

A quick Internet search will reveal a variety of different intake manifolds for the LS. Back in 2015, Richard Holdener completed a test with no less than 20 different intake configurations for HOT ROD. Because this test was run on the intakes that fit just the cathedral-port heads, and at least as many are also available for the rectangle-port heads, it should be evident that a great many intakes are currently available for LS engines. Naturally, the plethora of available intakes differs widely in design and construction, but for this simple test, we will focus primarily on the effect of a change in runner length. Although some like to point to maximum airflow, the reality is that runner length offers much more of a change in the power curve than even drastic changes in total flow. To illustrate the effect of changes in runner length, we decided to compare two intakes with sizable changes in runner length, a Dorman LS6 copy and the Holley Race Sniper. Just for good measure, we also included the Sniper’s big, bad brother, the Hi Ram.

Obviously, the test engine played a part in the results, so we chose one capable of utilizing the power potential of the trio of intakes. In truth, these intakes would be run on different combinations, as the substantial change in runner length meant they were designed for optimizing power production at different engine speeds. The test mule started out life as a 2008 6.0L LY6, but it was modified prior to running this test.

Even though it was still equipped with the stock bottom end (with extra ring gap for boost), the VVT LY6 cam was replaced by a much healthier grind from Brian Tooley Racing. The BTR cam offered 0.641/0.595-inch lift, 237/252 degree of duration, and a 114-degree lobe separation angle.

The LY6 featured rec-port (LS3-style) heads, but we replaced those with a set of CNC-ported Gen X 225 heads from Trick Flow Specialties. The cathedral-port 225 heads represented a sizable upgrade in power over the stock LY6 heads (tested at over 30 hp), but they also allowed us to compare this trio of cathedral-port intakes. The test engine was also equipped with a few other components from the boys at Holley, including injectors, their HP management system, and a set of 1 7/8-inch Hooker headers.

With our engine ready, it was time to run our trio of intake manifolds. In reality, we only wanted to compare two different intakes with noticeably different runner lengths. Because we had them on hand, we decided the Dorman LS6 and Holley Race Sniper represented enough of a difference in runner length to illustrate what happens. After running the test, we noticed we had a Holley Hi Ram just sitting there collecting dust, so on it went.

Why the big concern for runner length, you ask? More than any other single design element, runner length determines the effective operating range of the manifold. This is from what we call the Reflected Wave, one of the three distinct forms of charge filling associated with the intake design. The Reflected Wave adds additional cylinder filling through a pressure wave; think of it as a mild form of supercharging. This occurs when a negative pressure wave is first created from the downward movement of the piston with the intake valve open.

With the long-runner intake out of the way, we installed the short runner Race Sniper intake. To put the long-vs-short runner length into perspective, the difference between the LS6 and Race Sniper was nearly 5 inches. Because the Race Sniper intake was designed with a larger throttle opening, it was run with a 92-mm throttle body compared to near 80 mm for the Dorman LS6. We know there will be complaints, but the difference in the power curves was not a function of throttle body sizing, as this only changes power once the throttle body becomes the limiting factor (up near peak power).

Equipped with the Race Sniper intake, the 6.0L produced a decidedly different power curve, with (as expected) much less torque, but more peak power at the top of the rev range. The Race Sniper offered gains as high as 38 hp, with a peak of 568 hp, but torque production suffered with just 464 lb-ft of torque. This is the classic long-vs-short runner intake comparison, as the runner length enhanced power production at different engine speeds. Now all you have to do is choose where you want your power production.

After running the Race Sniper, we heard a little voice over in the corner calling our name. Not one to leave a soldier behind, we installed the Hi Ram in place of the Race Sniper.

The Hi Ram offered slightly longer runners than the Race Sniper, and the torque curve illustrated this fact. Equipped with the Hi Ram, the peak power jumped substantially to 589 hp, but torque was up as well (at least compared to the Race Sniper) to 472 lb-ft. This was obviously less than the 483 lb-ft produced by the Dorman LS6 intake, but the Hi Ram offered gains as high as 54 hp.

Once again, as Richard Holdener showed us, the short-runner Hi-Ram (compared to the Dorman LS6) offered more peak power at higher engine speeds, as the runner length was tuned to optimize power much higher than the long-runner LS6. As indicated previously, the optimized power production is based on runner length, and it remains in effect even under boost. We know this because we have tested the theory extensively, both in naturally-aspirated applications and with turbos and blowers. The takeaway here is simple: length matters! You need to match the effective rpm range of your intake with the cam timing and head flow to maximize power production. Long runners will do it at lower engine speeds than shorter ones.