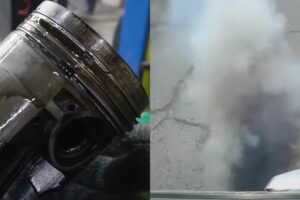 Piston oil rings and valve seals are among the kind of engine components you’ll rarely give a second thought. They performing a vital task, though, and with them out of the picture, your engine wouldn’t last very long at all.

Both of these components do the same job but in different locations – they’re all about keeping oil out of the combustion chamber. The oil rings are the lower of the three rings you’ll find on a piston – these wipe oil from the cylinder walls and push it back down into the sump. Valve seals meanwhile are little pieces of rubber that fit over the top of the valve stem.

An issue with a valve seal and/or a piston oil ring will result in excess oil getting into the combustion chamber and burning up, causing higher oil consumption and a whole load of nasty blue-white smoke to spit out of your exhaust. But what if you didn’t have any valve seals or piston rings at all? Happily, we need not wonder – the guys from Russian YouTube channel Garage54 decided to find out for themselves.

The car used for the experiment was inevitably a Lada, specifically a 1200 estate. It had all of its valve seals removed along with the lower oil seals, leaving the middle rings – these do have a part to play in keeping excess oil reaching the top compression rings but aren’t enough on their own.

The Lada was filled with oil up to the ‘max’ position and driven at concrete ‘test track’ so as not to alarm and other drivers with the expected plumes of smoke. Sure enough, there was plenty of that going on.

After only 31 miles, the oil level was reading just below the ‘low’ marker. We can’t be entirely sure how much oil was burnt off in that short stint, but it would have been a significant chunk of the circa-five litres of oil this car would normally carry.

Left long enough, the oil levels would get dangerously low, causing awful things to happen within the engine. Then again, this being a Lada, we bet it’d keep going for a while…