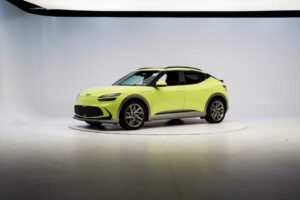 The 2023 Genesis GV60 has earned a Top Safety Pick+, the IIHS announced Thursday.

The TSP+ is the highest safety rating issued by the insurance-industry funded agency. The nod marks a rare sweep for the brand, with every model tested in 2022 earning the designation intended to standardized safety ratings and simplify the car-shopping process.

Hyundai’s luxury brand joined Volvo in being the only brands to ace the IIHS’s tests and earn TSP+ awards, but both automakers benefit from a small portfolio of vehicles. Still, the new GV60 electric crossover is the sixth Genesis model to earn a TSP+, and as the brand’s first dedicated electric vehicle, it bodes well for electric vehicles to come.

A Top Safety Pick+ rating is widely considered the industry’s most rigorous crash testing and safety assessment, and it is far more up to date and comprehensive than the NHTSA’s five-star safety rating system. Vehicles must earn “Good” ratings in all six crash tests, and they must be available with an automatic emergency braking system that earns at least “Advanced” ratings in avoiding or mitigating crashes with both vehicles and pedestrians. The last criterion is a “Good” or “Acceptable” rating on standard headlights.

The headlight test has been one of the hardest for automakers to meet, as it measures everything from glare to oncoming motorists to four different tests for visibility on curves. Not Genesis: The 2023 GV60 earned the highest “Good” rating for its LED projector headlights that also have automatic high beams.

Its standard automatic emergency braking system earned “Superior” marks, and it avoided a collision in tests with a child, adult, and vehicle at speeds of 12 mph and 25 mph.

Genesis also equips the GV60 with driver-assist features that go beyond the IIHS testing and beyond the standard safety tech offered by most other luxury brands. In addition to automatic emergency braking front and rear and automatic high beams, it has front and rear parking sensors, blind-spot monitors, adaptive cruise control, a blind-spot display that shows a live camera view in the instrument cluster, and a surround-view camera system.