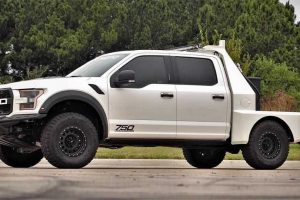 Here’s another unofficial Ram TRX contender that wants your attention.

Even before the 2021 Ram TRX was born, supercharged V8 trucks were already a thing but not with Ram trucks (none that we’re aware of) but with one of its greatest adversary, the Ford F-150. Apart from Hennessey Performance, PaxPower has been making these trucks for a few years already.

The Texas tuner’s latest creation is this flatbed Raptor-converted Ford F-150. It’s one of a kind, or so the company claims, and it’s got a handful (I think that’s visible enough) of upgrades aside from the Stage 2 Whipple supercharger that ramps up the power output to 750 horsepower (559 kilowatts).

The obvious updates include the OEM Raptor panels and components, while other parts such as FabFours Aero bumper, Method wheels, Toyo tires, and Borla exhaust were handpicked by the owner of this truck.

The custom flatbed, which features lightweight aluminum construction, was made by TurnKey Industries. It has multiple connection points and is designed to carry various sorts of loads such as tanks, welders, snowmobiles, or even a flatbed camper.

With these parts in place, load capacity is increased thought PaxPower forgot to disclose its payload rating. The company mentioned, however, that it’s increased b a 5,000-pound mid-travel airbag system for the rear suspension. This dampening system also allows for soft daily ride, the tuner claims.

PaxPower didn’t disclose the price for this commissioned work, but we suspect it won’t come cheap as its V8 Raptor and Diesel Raptor conversion start at $25,000, excluding the donor vehicle which should be the outgoing Ford F-150. If you’re interested, you might want to visit the PaxPower’s website and drop them an inquiry.