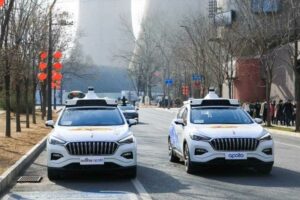 No more safety drivers behind the wheel to intervene.

Artificial intelligence giant Baidu just launched a driverless robotaxi service in Beijing, China’s Shougang Park. As one of the venues for the 2022 Beijing Winter Olympics, next year the service will begin transporting visitors attending the games.

Serving as a big step in the worldwide push towards autonomous driving, Baidu’s Apollo Go Robotaxi service is the first paid autonomous vehicle service where users can hop in a taxi without a backup driver to intervene. Customers will be able to hail a ride using an app, which allows them to locate a taxi within their vicinity. If they are unable to spot the car, users can remotely honk the horn to find their ride.

Unlocking the vehicle will require a quick scan of a series of QR codes for identity verification and pandemic prevention. After hopping in, passengers can simply tap on the “start the journey” button. Shortly after, the car will start moving after ensuring that the doors are closed and seat belts are fastened.

“Introducing unmanned services is an indispensable state for the commercialization of autonomous driving,” said Vice President and General Manager of Baidu autonomous driving technology Yunpeng Wang. “Today, we are opening the fully driverless robotaxi services in Beijing for the public, which we achieved only after conducting countless scalable driverless tests in many cities over a prolonged period of time.”

If you’re still not convinced on the technology, Guidehouse – a global consulting giant – recently named Baidu the top autonomous driving vendors in the world. To date, the AI powerhouse has been granted 2,900 patents for intelligent driving. Even with Baidu investing in autonomous driving for nearly eight years, we’d wager that some passengers will still get cold feet before hopping into the Apollo.