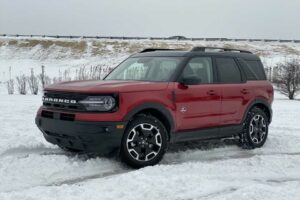 The baby cousin of the forthcoming Ford Bronco, the Ford Bronco Sport earned the highest marks in the industry’s toughest safety tests, receiving “Good” results in all six crash tests. The government-run NHTSA hasn’t crashed the Bronco Sport at the intersection of science and safety, but it usually aligns with IIHS tests.

The 2021 Ford Bronco Sport also excelled at avoiding crashes, earning “Superior” ratings for its standard automatic emergency braking system. In tests at both 12 mph and 25 mph, the Bronco Sport avoided crashes with vehicles and pedestrians, which is noteworthy as pedestrian fatalities continue to climb despite an overall decrease in traffic fatalities over the past few years.

Available in five trims, the Bronco Sport also comes standard with active lane control, blind-spot monitors, and automatic high beams. Its headlights gave the Bronco Sport a safety edge over its mechanically related sibling, the 2021 Ford Escape. The Escape earned a Top Safety Pick, but the halogen lights on most trims earned only a “Marginal” rating. The Bronco Sport one-upped it with standard LED headlights rated “Good.”

Despite criteria that toughens every few years, the IIHS doled out more TSP+ awards for 2021 than in past years, indicating more automakers are complying with enhanced safety expectations. For 2021, 61 models earned a TSP+ award, and 42 earned a TSP, bringing the total number of award winners to 103. Last year, there were 64.

The 2021 Bronco Sport joins other compact crossovers such as the Ford Mustang Mach-E electric crossover, Mazda CX-5, Nissan Rogue, Subaru Forester, and Volvo XC40 at the top of the safety class.