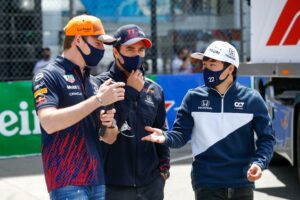 Yuki Tsunoda was happy to hear that fans on social media were backing him after qualifying in Mexico, feeling he was unjustly criticised by Red Bull.

Out on track for a final hot lap, the Red Bull team-mates came up behind Tsunoda who moved off the track to give them room. That distracted Perez who made a mistake and went off with Verstappen backing off as a result.

Verstappen called him a “dumb idiot”, Horner told the media that Red Bull had been “Tsunoda-ed”, and Perez said the rookie was “in my way”.

Fans, however, felt Red Bull’s criticism of the driver was unfair and uncalled for.

Told by The Race of the support he garnered on social media, Tsunoda said: “Yeah, I mean, I was expecting a bit of the opposite so I was not watching too much social media.

“But I’m happy to hear that, even though I ruined the lap for the national driver.

“Like I said [on Saturday], it was the only place to go. I did my best to not stop him. It is what it is.

“But I’m happy to hear that [many fans were on his side].”

Things did not go according to plan for Red Bull in qualifying 😕#MexicoGP 🇲🇽 #F1 pic.twitter.com/tGZSk2AtKU

One person who was firmly on the driver’s side was his AlphaTauri team boss Franz Tost.

He defended his driver, telling the media: “We told Yuki over the radio that the Red Bulls were coming and he didn’t want to go off track and disturb them.

Red Bull team boss Christian Horner seems to have thrown a bit of a U-turn in his criticism, saying social media “exploited” his comment about Tsunoda.

“Having had a chance to consider it I think in fairness to Yuki, perhaps he could have been helped a bit more with more information,” Horner said.

“But the outcome was unfortunate, particularly as he was only there to give a tow for his team-mate.”

He added: “Unfortunately social media has a habit of picking on certain lines and then exploiting them.

“It would be a pretty boring world if you weren’t able to comment on the performance of a driver.”

Unfortunately for the AlphaTauri driver he wasn’t able to show the world what he could do, crashing out of the Mexican GP on the opening lap through no fault of his own.

“I think Ocon got sandwiched and there was not any place to escape for him and his front tyre and my rear tyre just touched,” he said.

“It’s just really frustrating. I think overall this weekend we’ve had really strong pace so it’s a shame. We had pace to score points in this race.”