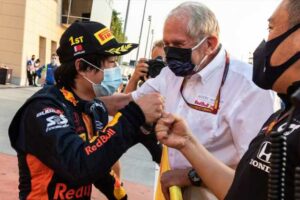 Yuki Tsunoda is expecting a call from Red Bull’s Helmut Marko ahead of the Styrian Grand Prix – and knows it will not be “fun”.

Marko is in charge of Red Bull’s driver programme, a system which over the years has introduced the likes of Sebastian Vettel, Max Verstappen and Carlos Sainz among others into the world of Formula 1.

And Marko’s latest prospect is Tsunoda, who sadly has not enjoyed the best of starts to life at AlphaTauri.

There have been glimpses of the Japanese driver’s talent, like at the opening round in Bahrain and also Baku where he finished P7, but costly errors have been a real drawback in Tsunoda’s rookie season so far.

The latest was a Q1 crash at the French Grand Prix, so Tsunoda is not expecting a “fun” chat when Marko calls him ahead of the Styrian Grand Prix.

“With Helmut, we are going to speak this evening, 8pm,” he told reporters.

“We haven’t spoke since Azerbaijan and I don’t think it’s going to be a fun conversation between us.”

If Tsunoda is to prove himself to Red Bull, then clean qualifying sessions are key and he hopes a more “relaxed” approach will go a long way towards achieving that.

“Normally, I tend to always push hard from the beginning of Q1, which I don’t have to,” he said.

“It’s not necessary to do it as our car consistently has good pace. It’s always got potential to go through to Q3 but I tend to always push from the beginning, the first push.

“Recently, in the last three races, I did two mistakes for the same reason – pushing too hard from the first push. That makes the whole qualifying finish [early]. Just got to be a bit more easy I would say, take a different approach, be more relaxed. And also, I would say I will build it up and be also confident from FP1.

“We will see how the approach works or not. Definitely, I have to change [my] approach and I don’t want to do mistakes again but still, I have to push in the qualifying to have a good result as much as possible. Definitely, I’ve got to change my approach.”