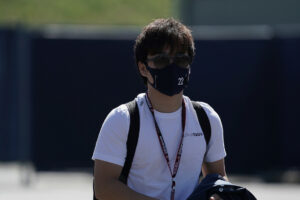 Yuki Tsunoda has been handed a three-place grid penalty after he impeded Valtteri Bottas during Q3 at the Styrian Grand Prix.

After a tricky start to life in Formula 1 Tsunoda moved to Italy to work more closely with AlphaTauri team boss Franz Tost, and already that call seems to be paying off after a solid qualifying display at the Red Bull Ring which saw Tsunoda finish P8.

There was, however, one incident for the Japanese racer and it has cost him the chance to start in the top 10.

During Q3 Bottas came up behind Tsunoda on the approach to Turn 4, and with the Japanese driver sticking to his line, a frustrated Bottas backed off and immediately complained of being impeded.

And the stewards agreed, imposing a three-place grid penalty on Tsunoda which sees him slide down to P11 on the grid. That promotes Fernando Alonso up to P8, while Lance Stroll shuffles up to P9 and George Russell inherits P10 for Williams.

“Car 22 had just completed a fast lap and had communication from the team that he was now on an in-lap. The team did not not warn car 22 of the approach of car 77 on a fast lap.

“Car 77 approached car 22 at the entry to Turn 4. Car 22 was on the racing line and while he attempted to move off the racing line to the outside he did impede car 77 unnecessarily.

“It is the responsibility of every driver to be aware of faster cars when they are on a slow lap.

“The team should have assisted the driver in being aware of the approaching faster car but such lack of communication is not an excuse for the driver.”

not ideal after such a strong Quali, but @yukitsunoda07 has received a three-place grid drop for impeding Bottas.

P11 tomorrow it is pic.twitter.com/6InbGAdIKp

Speaking to Sky F1 about the incident before his penalty was handed out, Tsunoda said: “Well there was still a gap between me and Valtteri.

“Also there is a bit of a crest before Turn 4, and at the point I saw him I was already braking.

“It’s mistakes from both, but to be honest if I changed direction and went inside, I was already at the braking zone.

“Also I expected Valtteri to overtake me from inside so it would have been a very big shunt.

“So there was not anywhere to go so that’s why I went straight, and it looks like there was still a gap to be honest.

“I don’t think I ruined his lap too much to be honest.”

Tsunoda was on a high too having survived his phone call with Red Bull driver programme boss Helmut Marko, but from P11 he still has the chance to satisfy his demands of a points finish.

“He gave me some advice that worked well, and also on the other side from France, he was not enjoying the chat,” Tsunoda explained as he shed some light on that call with Marko.

“It was 50/50, he put some pressure on me, but finally I nailed it to be in the top eight so hopefully he is not stressed like he was before Friday.

“But he wants me to get scoring the points tomorrow.

“It is the first step in qualifying, to make me happy and to make him happy I have to score points.”