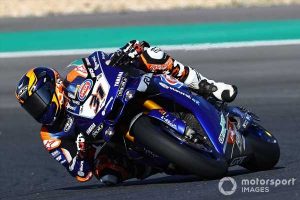 Yamaha has explained why it didn’t promote Garrett Gerloff to its factory World Superbike team for 2021, despite the American rider’s impressive run of form in his rookie season.

Gerloff stepped up to WSBK with GRT Yamaha this year after a race-winning stint in MotoAmerica, and scored three podiums at the back end of the campaign across the Barcelona and Estoril rounds.

He was classified as the second highest independent rider in 11th after Go Eleven Ducati’s Michael Ruben Rinaldi, who has coincidentally secured a factory promotion with the Italian manufacturer in place of Chaz Davies in 2021.

But while Yamaha also had space in its works squad following Michael van der Mark’s move to BMW, it chose to give a direct graduation to newly-crowned World Supersport champion Andrea Locatelli, with Gerloff retained at GRT for a second season.

Gerloff also has been given a surprise call-up from Yamaha to take part in Friday practice for weekend’s MotoGP European Grand Prix while Valentino Rossi awaits the result of a coronavirus test.

Asked by Motorsport.com if Yamaha should have promoted Gerloff to the factory team and allowed Locatelli a chance to gain experience at GRT, team manager Paul Denning said: “Logically, absolutely, I agree with you. Could work either way.

“In the end probably the biggest consideration was to support the junior team [GRT], Gerloff is happy there, [and with] his crew.

“There are still six or seven tracks he hasn’t seen if we have a normal season next year. So I think it makes sense to give him a second year with the team where is happy.

“He’s young enough, he hasn’t missed any chance. The bike is the same, the support is more or less the same. I believe that he will have the 2021 equipment.

“For me it doesn’t make a big difference [as long as] he’s happy there. And if he wins some races next year, it shows even more the junior programme and the junior team is working and the level is high enough.

“We have to build the credibility, not only try to win races with the official team but across the whole platform.

“And when you consider Locatelli comes from the school of [Joan] Mir, [Fabio] Quartararo and these guys, even if he didn’t achieve the success he hoped to achieve in Moto2, he’s shown this year his ability to manage races [in World Supersport].

“Again, Yamaha would be stupid not to take this opportunity to take this young rider and see what he can achieve on Superbikes.”