WRC Champ Shows You How To Drive a Rally Car

The current specification of WRC cars is absolutely mind-blowing. These all-terrain machines are complex, expensive—and as a direct consequence of their extreme performance, not exactly easy to drive, regardless of pace. This doesn’t phase folks like Estonian master Ott Tänak, 2019 WRC champion with the Toyota Yaris WRC, who today is showing us around his office: the 2020 Hyundai i20 Coupe WRC.

The i20 Coupe WRC weighs a mandatory 2,623 pounds, a figure that goes up to 2,976 pounds with the driver and co-drive onboard. In the performance department, Hyundai Motorsport’s turbo-four engine puts out 380 horsepower at 6,500 rpm and roughly 331 pound-feet of torque at 5,500. This power goes through a cerametallic twin-disk clutch and a six-speed sequential gearbox and four-wheel-drive system featuring mechanical front and rear differentials, as well as an electro-hydraulic in the middle.

A steel and composite body is secured by the toughest roll cage in the business, MacPherson struts with adjustable dampers all around, Brembo brakes with air-cooled 4-piston calipers, and above all, a beefy hydraulic handbrake. 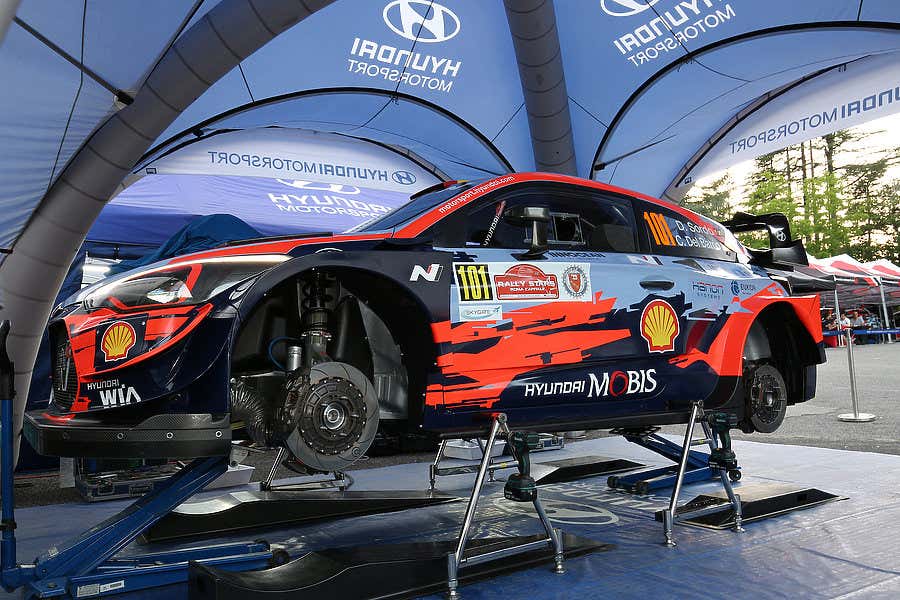 Another great thing about WRC cars is that they all need to be road-legal. Driving on public roads between stages and service points is a must, and so an i20 Coupe WRC comes with a set of plates and a (German) registration.

So far, Ott Tänak has only entered three WRC events with Hyundai, retiring in Monaco and finishing second in both Sweden and Mexico. Now, the team behind the live coverage WRC+ caught up with him during testing in Germany, wondering how a WRC car goes from its jacks in service to a stage record a few miles up the road.

As Tänak explains, thanks to the giant rear wing and the restrictive seat design, visibility to the rear is poor, so it’s much appreciated that the technicians help him navigate out of the tight service areas. On the steering wheel, the most important settings are included, such as engine and gearbox mapping, brake bias and launch mode.

On the line, it’s roughly 30 seconds of visualizing the stage, and then its handbrake on, full throttle, and a sub-four-second run to 62 mph depending on the grip levels. WRC cars produce more downforce now than ever, and a moment of hesitation can lead to precious seconds lost for good. After the first few corners, he establishes where the grip limit is and Tänak is in full attack mode from then, using left-foot braking Scandinavian style “because we have two feet.”

At 32, the reigning champion has 12 WRC victories on his belt with co-driver and fellow Estonian Martin Järveoja.