Home » Racing » 'With Lewis everything is in play for the victory'

'With Lewis everything is in play for the victory' 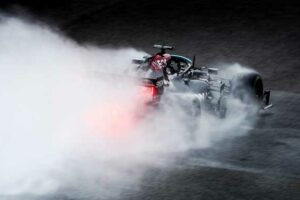 Toto Wolff feels “everything is in play” for Lewis Hamilton to take the Belgian GP win, but admits he could have a “problem” if it rains heavily.

Hamilton will line up P3 on the Spa grid after clocking a best time of 2:00.099 in the wet on Saturday.

That put him 0.334s down on his title rival Max Verstappen, who claimed pole position, but it also meant the Brit was slower than the Williams of George Russell, who shocked the paddock with his impressive P2.

Asked about the deficit to those ahead, especially the Red Bull, Wolff put it down to the different set-ups between the RB16B and the Mercedes W12.

“I think it’s downforce related,” he told Sky Sports. “They [Red Bull] have a bigger wing on the car, which obviously gives you advantages in these conditions.”

However, the Mercedes motorsport boss says the win on Sunday is still on the cards for Hamilton, who is chasing his fifth victory at the Spa circuit.

“With Lewis, everything is in play for the victory,” insisted the Austrian.

“We have a strong race car, we are more on the dry setup side, with good straight line speed.

“If the weather is like this, we have a problem, but otherwise, I think we should be good, for the race win.”

The weather conditions are forecast to be the same for Sunday’s race with an 80 percent chance of showers throughout the grand prix.

And in order to take the win, Hamilton first has to get around Russell with the Williams driver saying he has no intention of making it easy for either of the title protagonists.

GEORGE: "I’m absolutely buzzing. Tomorrow’s the important one but it’s been mega today.

"I’m delighted for everyone. If the weather is the same and it’s there for the taking tomorrow, we’ll go for it."#BelgianGP 🇧🇪 #F1 pic.twitter.com/L2tlCuPbdT

“That’s the plan, that’s the plan,” he said when asked if grabbing the early lead was on the cards. “If it’s there for the taking, we’ll go for it.”

But, he later conceded, a top five finish is probably the best he can hope for.

“We’ve obviously got to be realistic,” he said, “we’ve got incredibly fast cars behind us but if conditions stay the same we have a car, which is probably quick enough, on merit, for the top 10.

“But if we start on the front row there’s no reason we can’t hold on to that position for the majority of the race, but I don’t think I’m going to do anything stupid with the cars around me that are clearly going to be faster than us.

“I think there’s no reason why we can’t finish, if the conditions are like this, top five and just maximise it, so points is an absolute minimum.”