Why Frederic Vasseur is not setting targets at Alfa Romeo 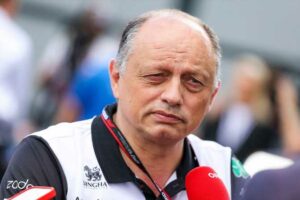 Alfa Romeo boss Frederic Vasseur has resisted the urge to set specific targets at the team for the 2022 campaign.

The Hinwil-based outfit have already nearly doubled last season’s points total after propelling themselves away from the back of the grid and into the heart of the midfield battle.

New recruit Valtteri Bottas has been responsible for delivering 24 of the 25 points so far that have put Alfa Romeo in the lofty heights of P5 in the opening stages of the season.

But Vasseur is not putting pressure on himself or the team to stay in that position or look even further ahead to the likes of McLaren and Mercedes above.

“I don’t want to set this kind of target,” Vasseur told RACER.

“Perhaps I’m wrong, but I’m just focused on my job and the job of the team.

“We have some updates in the pipeline that we will bring to Barcelona, and we have to do a proper job, be focused on ourselves, and then we’ll see where the others are.

Vasseur is also bracing himself for the tough times that will inevitably come during the course of a long, arduous season and it is in those moments where the team will be truly tested.

“When everything is going well, it’s easy to do a good job – for him, for us, for everybody,” he said.

“We have to enjoy this period and this momentum but I hope this journey will continue like this and that we will extend the situation.

“But at the end of the day we will have tough times during the season and it’s at these times that we have to stay together and do a great job.

“I’m quite happy with the job done so far, but it’s much easier in this situation.”