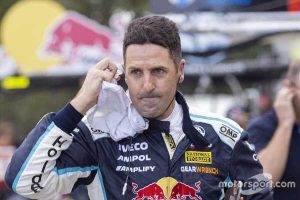 Jamie Whincup has conceded that a mistake-ridden weekend at The Bend has hurt his chances of sealing an eighth Supercars title this year.

The Triple Eight driver came into the third-last round of the season 143 points adrift of McLaughlin, only for the margin to blow out to 215 after three tough races at The Bend.

It could have been much worse, too, Whincup having been on track to dump bulk points in Saturday’s opener after clashing with McLaughlin on the opening lap.

As McLaughlin charged back into podium contention, Whincup was left mired at the back end of the field thanks to a 15-second penalty for the contact on the Penske Ford.

McLaughlin, however, then picked up a 15-second penalty of his own for hitting Lee Holdsworth in the closing stages, which dropped him from third to 15th.

Race 2 didn’t go much better for Whincup, an air spike issue during his stop costing him serious time and leaving him just 17th.

It wasn’t until the final heat that Whincup made it to the podium for the first time with third, and even then he dropped points to winner McLaughlin.

He now faces an uphill battle to keep the gap inside 300 points at next week’s second round at The Bend, which would leave him in mathematical contention heading to the season-ending Bathurst 1000 next month.

“That’s obviously the goal, but we made too many mistakes this weekend,” said Whincup. “As a team, and I put my hand up as part of the team, but also from the driving side of things as well.

“We’ve got some work to do during the week to try and get some more pace out of the car. And then minimise the mistakes.”

McLaughlin, meanwhile, says he won’t be too focussed on wrapping up the championship next weekend, his preference a simple one race at a time approach.

“It is within reach if Jamie has a bad race. But at the end of the day you don’t wish bad on anyone, you just go out there and race,” he said.

“Like today, if we can win a race and Jamie finishes third, that’s good for us. We still get a bigger points gap.

“We’re just focussing on trying to make the job easier for ourselves down the track. If we can keep growing it from what it is now, that’s fantastic.”