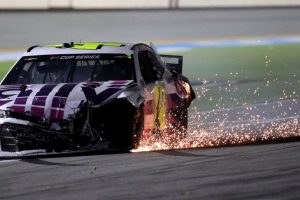 The NASCAR Cup Series regular season has ended and all that remains is 10 races in 10 weeks to crown a champion.

Serving as a preview for what comes next, the regular season finale on Saturday night at Daytona International Speedway featured all the elimination drama, point calculations and win-and-you’re-in scenarios that has come to define the chase for the championship.

It was a race of the year contender that saw William Byron win his way into the Round of 16 with Matt DiBenedetto denying Jimmie Johnson a playoff spot in his final full-time season.

Here is everything you may have missed over the weekend:

It had been almost three calendar years since William Byron had won a points-paying NASCAR race of any kind. It’s been almost three full seasons since Rick Hendrick tapped Byron as the successor to Jeff Gordon’s legacy in the iconic No. 24. It took 98 races but Byron finally reached victory lane in the Cup Series.

It was the same number of starts teammate Chase Elliott needed to reach victory lane at a point both drivers started to feel the pressure to perform. Elliott has since went on to become the most consistent driver at Hendrick Motorsports and a perennial championship contender.

Byron has been something of a prodigy over the past five years, adding to the expectation that he would eventually win in Hendrick equipment.

“That feeling of coming off (Turn) 4, it’s just a shot of adrenaline right into your arm, it really is,” Byron said. “It’s just an incredible feeling. I can’t describe winning a race in NASCAR. It’s been a while.”

A subplot of Byron and Johnson racing for the final playoff spot the past several weeks was their shared connection with crew chief Chad Knaus, who served as the engineer behind the No. 48’s seven championships in 17 years before his reassignment to the No. 24 team.

Both Johnson and Byron had gone winless until Saturday night with observers speculating over who would breakthrough first.

“The one thing to be selfish from my standpoint is I wanted to get to victory lane with a car … without Jimmie Johnson’s (name) on top of the door,” Knaus said. “Nothing against Jimmie or any of that, but just to do it, to see if I could accomplish it.

“We’ve come close, had some really solid runs with the 24 car. Not as many this year as we would have liked to have had. To do it really means a lot, to be able to bring this team into the playoffs again.”

At the same time, Knaus felt a degree of remorse that it came at the expense of Johnson, who was only in this predicament due to a positive COVID-19 test that prevented him from starting the Brickyard 400 in July.

“Let’s be quite honest, right? Jimmie shouldn’t be in this position,” Knaus said. “If it hadn’t been for COVID, him missing a race, he should have been solid in the playoffs. That hurts. I hate it for Jimmie. He’s one of my best friends. He was the first guy that came by pit road and looked up at me, revved up the engine, gave me a thumbs up. He means the world to me. He’s a great man and brother of mine.

Saturday’s race at @DISupdates was one for the history books. pic.twitter.com/AwaUzrwvSB

Knaus also said the overall emotions were different with Byron compared to his first win Johnson in 2002 at Auto Club Speedway.

“Obviously, in 2002 it was just different,” Knaus said. “It was so raw and so pure, just a different time. William is experiencing those emotions right now obviously. I think it’s fantastic. We’ve got a handful of guys on the team that have never won a Cup race before. They’re going through those same emotions.

“For me it’s quite honestly a little bit more of a relief than maybe the elation of victory.”

For the second consecutive year, Jimmie Johnson will not compete for the record-breaking eighth NASCAR Cup Series championship. And with retirement looming at the end of the season, Johnson will remain tied with Richard Petty and Dale Earnhardt on the all-time list.

Johnson and his No. 48 Hendrick Motorsports team missed the cut by just six points but was denied entry due to a multi-car incident on Lap 160, that sent Matt DiBenedetto to the Round of 16 instead.

If not for a positive COVID-19 test that prevented him from racing the Brickyard 400 in July or a disqualification from a second-place Coca-Cola 600 finish in May, Johnson makes the playoffs easily instead of wondering ‘what if?’

“That’s the disappointing part, to look back at ones that got away—ones that I never got a shot at, like the Brickyard—and to miss it by only six points,” Johnson said. “I knew it was going to be an emotional couple of weeks going down the stretch. I knew the situation we were in, so it’s not like this is a shocker or a surprise. My emotions are what I would have expected.

“There are still races to win.”

“I’m definitely disappointed, but we’ve been running well, and I still know I can win a race. There are still races to win. After a couple of beers and a flight home, I’ll get a good night’s rest, try to shake it off tomorrow and just focus on the next race.”

Johnson will retire from full-time NASCAR competition at the end of the year. He intends to run over a dozen IndyCar Series events next season, but hopes to break a three-year winless drought before his departure.

“There are 10 more chances to take a trophy home, that’s all we’re focused on at this point,” Johnson said. “Nothing else matters. It’s about winning races and finishing out this year as we should.”

After the first three-race round, the bottom four winless drivers from that round will be eliminated. The same rules apply for the next three-race round and the final three-race found. The final four drivers will race amongst themselves with the best finishing driver at Phoenix crowned the champion.

This is how the three-race Round of 16 will begin.

Harvick and Hamlin have all but punched their tickets into the championship race at Phoenix. If they simply stay out of trouble in the final three-race round, they’ll both advance. The final two spots are still very much up for grabs.

Denny Hamlin did not confirm nor deny a rumor that he was interested in spearheading a consortium to purchase a stake in Richard Petty Motorsports.

Speculation had started to form over the last two weeks that Hamlin and Michael Jordan were looking to invest into RPM and reinvent it as a Toyota Racing Development alliance.

“I don’t have anything to announce or to speak about when it comes to it,” Hamlin said when asked about his rumored interest in the team that fields cars for Bubba Wallace.

“I think that I’m always looking towards what I’m going to do after my driving career is over. I’ve got some great partners that support me and my decisions in what I will do for years to come. So, I don’t know. I wish I had something to announce, but I really don’t.

“There’s a lot of things up in the air that are still getting worked on, but I just got – I’ve got to win this weekend and next weekend, and that’s where I’ve got to focus, but certainly I believe that, no matter what, my career will be with Joe Gibbs Racing and FedEx as long as I want to drive.”

Hamlin isn’t sure what he wants to do once his driving career comes to a close but expects to race for Joe Gibbs Racing until he retires. His current contract expires at the end of next season.

“I’m always looking at avenues that would allow me to stay in the sport beyond driving,” Hamlin said. “Certainly, it’s a sport that I believe in. Certainly, the financial model hopefully will get better in the next few years for the team owners, regardless if I’m in it or not. But I don’t know. My focus has got to be on driving and winning a championship for Toyota and FedEx right now. If there’s ever opportunities to prepare myself for the future, then I look to capitalize on those.”

Hamlin and Wallace are both represented by the ProSport Management agency. Jordan’s public relations representatives have denied the report’s accuracy.