Home » Racing » What time and channel is the NASCAR Cup race at Las Vegas today?

What time and channel is the NASCAR Cup race at Las Vegas today? 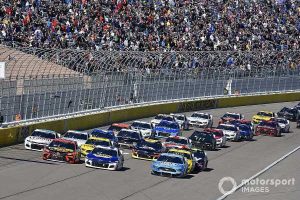 The Round of 12 begins at Las Vegas Motor Speedway as the NASCAR Cup Series playoffs roll on.

What time is the NASCAR race today?

Coverage of the South Point 400 at Las Vegas Motor Speedway will begin at 7:00 p.m. EST.

The race will be 400 miles, 267 laps and split into three stages (80-80-107). LVMS hosts the opening race of the Round of 12 in the NCS playoffs with the remaining 12 title contenders hoping to advance into the eight-driver semi-final round.

Kevin Harvick locked himself into the next round via his victory over Kyle Busch at Bristol last weekend.

What channel is the NASCAR race today?

The race will be broadcasted live on NBCSN and PRN will carry the radio broadcast.

Joey Logano is the most recent winner at Las Vegas, doing so earlier earlier this year in February.