Home » Racing » What time and channel is the IndyCar race today? 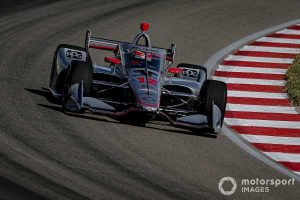 Saturday Aug. 29 and Sunday Aug. 30 sees the NTT IndyCar Series’ third double-header of the 2020 season and the eighth and ninth rounds. Here’s how to watch all the action from the Bommarito Automotive Group 500 at World Wide Technology Raceway.

The grid order for the two races was decided as it was in Iowa – a driver’s first of two flying laps set his time for this afternoon’s race, while his second lap set the grid for tomorrow afternoon’s race. The cars were then impounded before the race, so that meant drivers qualified with race-level downforce, so they can deal with dirty air from other cars in the race.

Will Power of Team Penske-Chevrolet scored the 59th pole position of his IndyCar career this morning so will lead the field to the green flag this afternoon, while Pato O’Ward of Arrow McLaren SP-Chevrolet will start alongside him.

Last week’s Indy 500 winner for Rahal Letterman Lanigan-Honda, Takuma Sato is also the defending race winner here at WWTR and took pole for tomorrow’s race here. Today he will start fifth, just behind an all-Ganassi Row 2, and alongside Josef Newgarden (Penske). Newgarden, who will start alongside Sato for the Sunday race, too, but on the front row, needs to start carving into Scott Dixon’s 84-point lead if he’s to have any chance of defending his championship title.

For a preview, facts, and full schedule for the event, click here

The grid line-up for today’s race is as follows: