WEC boss Neveu to stand down at the end of 2020 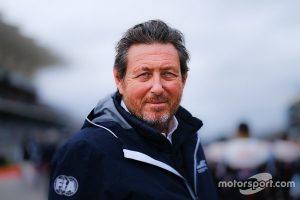 Gerard Neveu, the CEO of the FIA World Endurance Championship and European Le Mans Series, will stand down from his position at the end of the current 2019/20 season.

Neveu was appointed by the ACO in 2011 to oversee the running of the returning World Endurance Championship, the successor to the Intercontinental Le Mans Challenge. Between 2012 and 2020 the WEC featured hybrid LMP1 prototypes from Audi, Porsche and Toyota as well as factory GT entries from the likes of Porsche, Aston Martin, Ferrari, Ford and BMW.

The championship is transitioning into a new Le Mans Hypercar era in 2021, but will do so without Neveu at the helm. Neveu is leaving his position at Le Mans Endurance Management, the parent company of WEC and the European Le Mans Series “to pursue new challenges in his professional career.”

“After nine years at the head of this superb motorsport programme, I think it is time for me to hand over the baton and allow new life to be breathed into the organisation under the leadership of Pierre Fillon,” Neveu said in a statement on Wednesday.

“Great pages in endurance racing’s history books will open in a few months, in particular with the arrival of LMH and LMDh, and I have no doubt about the successes to come for these championships under the ACO umbrella.

“Until then, I will do my best to finish the 2020 season in the best way possible. Then it will be time for me to set off on a different personal path in 2021.”

ACO president Pierre Fillon added: “In creating and, above all, developing our FIA World Endurance Championship, Gerard Neveu was one of the fundamental building blocks.

“The ACO and WEC has progressed together, and we have fought many battles to establish our championship within the world of motor racing.

“For all these professional and human adventures we have experienced together, I sincerely thank Gérard. I particularly salute his commitment, his involvement and his extraordinary energy.

“From here on I wish him the best in his future professional activities. From a personal point of view he will remain a member of our endurance family and, whatever his activities are, there is little doubt that future joint collaborations will emerge.”

Before his role as the CEO of WEC and ELMS, Neveu was general manager of the Paul Ricard circuit at Le Castellet. A successor to Neveu has not yet been announced.