Home » 'We don't want Imola as a museum, but as the future of Formula 1'

'We don't want Imola as a museum, but as the future of Formula 1' 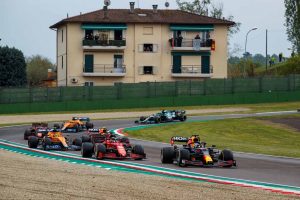 Race organisers at Imola are determined to keep the circuit on the Formula 1 calendar beyond 2021, saying that the famous old circuit is “not a museum” after a thrilling race at the weekend.

The Autodromo Enzo e Dino Ferrari was first used in F1 back in 1980, hosting races all the way through until 2006 before it was taken off the calendar.

The pandemic meant that Formula 1 pieced together a calendar predominantly in Europe to minimise travel where possible and Imola was reinstated for 2020, carrying on into this season.

Organisers used the opportunity to advertise the region to the world through the Made in Italy campaign. Emilia Romagna is the home of the famous Motorsport Valley – which connects Bologna, Modena and Maranello, alongside being in close proximity to several tracks, including both Imola and legendary motorcycle venue Misano.

“I’m happy with this event, which allowed us to publicise Made in Italy even more,” Italy’s foreign minister Luigi Di Maio said to Sky Sport F1, per Formula Passion.

“Thanks to [president of Emilia Romagna, Stefano] Bonaccini and the Emilia Romagna region for believing in the Imola stage. This GP allows the Motor Valley to best represent the spirit of Made in Italy, which are artisans and small businesses.

“All the most beautiful things that Italy produces, we have advertised in front of millions of spectators around the world.

“I’m rooting for [Charles] Leclerc, [Carlos] Sainz. We all carry [Michael] Schumacher in our hearts. I saw races with Minardi, [Jean] Todt, [Stefano] Domenicali, idols of my childhood and adolescence.

“We will work to have a Grand Prix at Imola again next year. It must become a fixed stop, together with Monza. They are the history of F1. We don’t want Imola as a museum, but as the future of Formula 1.”

Imola is popular among drivers for its fast, flowing nature and Fernando Alonso in particular described the circuit as being “amazing” in modern cars.

Di Maio’s thoughts have been echoed by president Bonaccini – who has already gone straight to the top to try and keep Imola on the Formula 1 calendar.

“I spoke to Domenicali first,” he said. “Who in the world has a heritage like this? Big motor brands, four circuits… we have found an alliance with minister Di Maio and the Italian government. Made in Italy makes a difference in the world.

“Emilia Romagna, with its excellence, believes that it is a fundamental building block, starting with mechatronics and engines. Leclerc told us that this track is one of the most exciting in the world. We hope to be there again next year.”