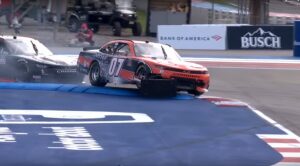 NASCAR Xfinity driver Josh Bilicki saw his race end early on Charlotte’s ROVAL Saturday. While not in contention for the win he was holding his own running in the pack.

On lap 30 however it all ended when Bilicki’s Chevy had a meeting with the curbs coming into the backstretch chicane on lap 30. Several of the curbs, known to racers as “turtles” were destroyed along with Bilicki’s car.

“Instead of collecting the two cars ahead of me I jumped the curb,” Bilicki told his crew on the team radio.

The crash led to a nearly five-minute red flag and a DNF for Bilicki. It was also a lesson for Bilicki, who will race in Sunday’s Cup series race, as well as the rest of the Cup series field: Turtles can, and do, bite.

At the end of the day it was lesson for NASCAR as well as they announced late Saturday night that they will remove the six sets of yellow and black rumble strips that include the ones Bilicki ran over.

NASCAR said the additional strips were put in place to keep vehicles from traveling at excessive speeds across the entire chicane. NASCAR officials discussed their potential removal with Charlotte Motor Speedway representatives and some Cup Series drivers in reaction to Bilicki’s crash.

All sides came to the conclusion that track limits and enforcement can still take place in the absence of the extra rumble-strip placement while avoiding an incident similar to the one that occurred with Bilicki’s No. 07 car.