Watch A Volkswagen Golf 2 With VR6 Swap Thrash The Nurburgring 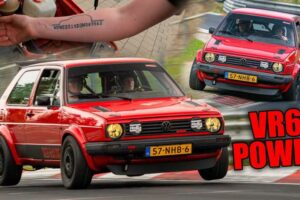 The driver has the VIN number tattooed on her arm.

Few trackdays can compete with the touristenfahrten experience at the Nurburgring Nordschleife. With one of the best race tracks in the world at their disposal, Misha Charoudin’s latest video features a girl named Kristel thrashing her VR6-swapped Volkswagen Golf 2 around the Green Hell.

Kristel built the car with her friends and says she has been to the Nordschleife just about every weekend since. Along with the engine swap, the interior has been fully stripped out and reinforced with a roll cage. A true petrolhead through and through, she also has the VIN number tattooed onto her arm.

That’s why it’s unfortunate to hear Misha mention that Kristel is one of the few women that take to the mystique of the Nordschleife. Regardless, with only around 225 horsepower (168 kilowatts) to work with, she isn’t afraid to send it around one of the most demanding race tracks in the world. She even gives Misha a good scare after staying on the throttle over the crest at Planzgarten.

Sabine Schmitz’s recent passing left a massive void for motorsports fans around the world. Nicknamed the Queen of the Nurburgring, her tenacity and positivity in and out of the race car left a lasting impact on the industry. Along with her on-track accolades – most notably a two-time winner of the 24 hours of Nurburgring – she proved that women belong in motorsport.

Nobody will be able to replace the excitement and vigor that Schmitz brought to the table, but it’s such a great sight to see Misha featuring great talents like Kristel. The fact remains that anybody who can keep Misha quiet in the passenger seat is a seriously quick driver.