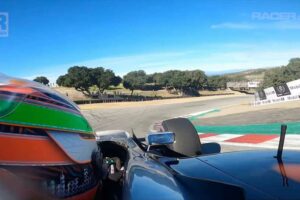 Modern IndyCars are by no means slow, and according to a driver who’s finished on the podium both there and in Formula One, more fun than F1. Even so, F1 cars are still faster around the same track, and just how much so was recently reiterated by the cameo of a 1998 McLaren MP4-13 at Laguna Seca. There, despite limited seat time, IndyCar rising star Patricio O’Ward still used it to set a lap time quicker than this year’s IndyCar pole position.

The MP4-13 was the first McLaren designed under Adrian Newey, the acclaimed engineer whose cars have won 10 F1 World Constructors’ Championships. This McLaren stands as the most recent car from Woking to achieve the feat, which it did in the hands of David Coulthard and Mika Häkkinen, and under the propulsion of a 3.0-liter Mercedes V10. Producing somewhere near 800 horsepower in a chassis weighing barely 1,300 pounds, it’s considerably more powerful and lighter than IndyCar’s Dallara DW12. And given both are downforce-heavy open-wheelers, the McLaren could only ever be quicker around the same track.

And of course, it was, with O’Ward taking to the track over the weekend for Arrow McLaren SP. O’Ward’s lap was recorded both offboard from the pit wall—where its wailing V10 made the same glorious impression it always has—and onboard, which showed just how hard he pushed the unfamiliar F1 car. (Make no mistake, when you use every inch of curb, you’re pushing alright.)

O’Ward clocked a 1:10.3, some seven-tenths quicker than the 1:11 he set in qualifying for this year’s IndyCar race there, and 0.5 seconds up on the pole time of Colton Herta. It was an altogether successful outing, one O’Ward looks set to relive, as McLaren CEO Zak Brown promised the young driver on Twitter that he’d see him in Abu Dhabi for an F1 test. So, even though the scuttled Andretti F1 deal means we won’t be getting an American F1 driver any time soon, plenty of us would be glad to settle for seeing yet another fellow North American in F1.