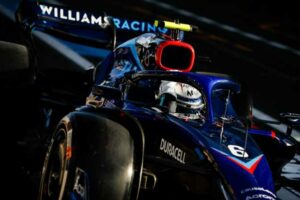 Nicholas Latifi is making “rookie errors rather often” says Jacques Villeneuve, but at least he provides “some excitement” in the grands prix.

Latifi crashed out of Sunday night’s Saudi Arabian Grand Prix, the Williams driver bringing out the Safety Car when he hit the wall at the final corner.

It was Latifi’s second crash of the weekend, the Williams driver having also shunted during qualifying.

“He seems to make these kinds of rookie errors rather often.

“It didn’t even look like an F1 accident, more like he was surprised by the new cars.

“Let’s put it this way – he always provides some excitement.”

Latifi has hit the barriers exiting the final corner

Excitement, though, that Sergio Perez could have done without.

It cost the Mexican driver the lead as he had pitted the lap before with Max Verstappen, Charles Leclerc and Carlos Sainz also receiving free pit stops. Verstappen was joined by the Ferrari drivers on the podium with Perez P4.

However, the last time a crash of Latifi’s brought out the Safety Car it benefitted a Red Bull driver. That was at last year’s season-ending Abu Dhabi Grand Prix where, through no fault of his own, his accident changed the outcome of the championship with Verstappen taking the win and the World title.

But it wasn’t just Latifi who Villeneuve was critical of, the 1997 World Champion also having a bit of a go at Esteban Ocon.

Ocon raced his team-mate Fernando Alonso hard for several laps, almost causing a collision at one point as he shut the door on the double World Champion in what was a borderline late move.

Saying he was “less impressed with Esteban Ocon”, Villeneuve asked “why would you battle hard with your own team-mate in the early stages of the race?

“You risk your own tyres and those of Fernando Alonso, and harm your team. Totally illogical, it made no sense.

“I also think that someone like Ocon who has been in Formula 1 for a while now should know by now when to fight and when not to fight so aggressively.”

The Canadian also shared his thoughts on Mick Schumacher’s horror crash during qualifying, the Haas driver thankfully unhurt although the same cannot be said of Haas’ budget.

“Looking at the corner where Mick Schumacher crashed, I’m amazed that the experienced architects who designed this circuit didn’t realise how dangerous that corner is.

“You only have to look at a few photos to see that, calculations are not even necessary.”