Home » Racing » Verstappen: 'We didn't do a good enough job'

Verstappen: 'We didn't do a good enough job' 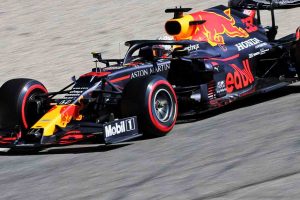 Max Verstappen says Red Bull simply “didn’t do a good enough job” after only managing to qualify P5 for the Italian Grand Prix.

Lewis Hamilton, Valtteri Bottas and Verstappen is a familiar trio we are all used to seeing at the top in Formula 1 but, in Q3 at Monza, the Dutchman was also slower than Carlos Sainz in P3 and Sergio Perez in P4.

Starting on the third row of the starting grid, though, comes as no surprise to Verstappen who has not been comfortable with his car all weekend.

“Not this weekend. The whole weekend we have been struggling a bit,” Verstappen said when asked if he was surprised to be qualifying in P5.

“I tried everything. I tried all the wing levels which are possible to run at Monza and at the end the lap time was just the same.

“It just shows when we are so low on downforce the car is just not where we want it to be.

“We are struggling for balance and grip so a lot of things to look into.

“It’s easy to say we are down on power but that is not an excuse.”

“We just didn’t do a good enough job. Monza is a very special track anyway. When we go back to say a more normal layout I expect us to be P3 again but it’s still not good enough from our side.

Asked if a podium was still possible at the Italian Grand Prix, he said: “I think so. We are all very close from P3 to P9, P10 so I expect we can still fight for P3.

“We won’t talk about Mercedes because that’s another level.”