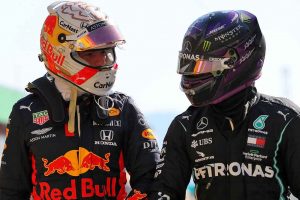 The likes of Verstappen and Charles Leclerc are viewed as the next World Champion drivers in waiting once Hamilton decides to hang up his helmet but the Mercedes driver looks poised to set the bar incredibly high before he leaves.

With a world record 92 wins to his name and soon to be seven World Championships, Hill was full of praise for Hamilton and sympathised with Verstappen about the challenge he will face to go even better than him.

“It’s amazing as for a long time we all thought Michael was unassailable,” Hill told BBC Breakfast.

“His talent is supreme. There’s not a single racing driver who has not looked enviously at Lewis Hamilton’s abilities and thought ‘what must it be like to be that brilliant’?

“Max Verstappen who is still in his early 20s must breathe a deep sigh.

“He’s realising he might have to go on until he’s 40, because if Lewis does the records will be so far out of reach that everyone will be racing in their fifties to try and break it.

“It’s like Alexander the Great, no worlds left to conquer.

“He’s got to tie up the title first and he looks on course for that, a couple more races and he should bag the title.

“After that it’s just carry on as long as you enjoy it.”

Hill also discussed when Hamilton will decide to stop and the controversy that he does bring as a Formula 1 driver.

“My dad (Graham Hill) stopped when he was 45 and people said ‘you’re going on too long’,” he added.

“Eventually the sharpness does go and you want to go out when people still see how brilliant you are, not tugging around trying to recover lost glories.

“But I’m sure Lewis will know when that time is.

“Sometimes he’s said a few things which have come out wrong and people are maybe not sure where he’s coming from sometimes. But he’s honestly a nice guy.

“It’s difficult when you win all the time.

“People like entertainment and I think it’s very difficult to entertain people when you are out in front the whole time. But he’s entertained us as drivers.”