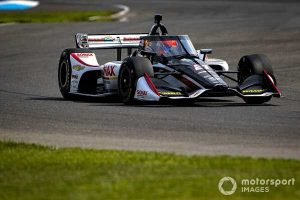 In a test where the top 15 cars unofficially broke the qualifying lap record of 66.6001sec held by Sebastien Bourdais since 2016, Arrow McLaren SP’s Patricio O’Ward was third fastest on a 65.9, one tenth faster than Alexander Rossi of Andretti Autosport and Jack Harvey of Meyer Shank Racing.

In his first test for Chip Ganassi Racing, 2020 rookie Alex Palou was 11th, just a tenth slower than the team’s pacesetter on the day, Marcus Ericsson, while the driver he replaced Felix Rosenqvist, turned a 66.5, around 0.6sec off Arrow McLaren SP teammate O’Ward.

Scott McLaughlin was 1.3sec off the ultimate pace, but only 0.5sec slower than Penske pacesetter on the day, Josef Newgarden, suggesting the squad was running a different program.

Johnson turned 100 laps and got within 2.8sec of fastest time, and only 1.3sec from next slowest.

Several teams will reconvene at WeatherTech Raceway Laguna Seca on Nov. 10 for the final team test of the year.