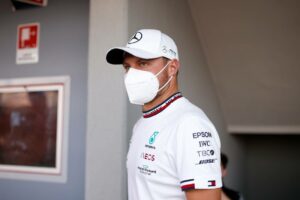 Valtteri Bottas has acknowledged victories will be out of the question next year when he joins Alfa Romeo.

That is despite the advent of the new Formula 1 regulations that have been designed to shake up the established order, as well as create more exciting racing.

If 2022 proves to be anything like 2021, Bottas is likely to find himself struggling to score points never mind win races, such has been Alfa Romeo’s lack of competitiveness.

Kimi Raikkonen – his fellow Finn whom Bottas is replacing when he retires – and Antonio Giovinazzi have accumulated only three points between them heading into the Italian Grand Prix.

Bottas has said he thinks the Swiss-based team are capable of making a “good leap forward” but as for the top step of the podium, it’s essentially a case of ‘forget it’.

“I know it will be different and I can’t expect us to win races next year,” Bottas, who has won nine grands prix for Mercedes, told Sky F1.

“It will be a different start. It really is like a new chapter in my career and it will be a lot about my expectations.

“I need to be realistic but also need to be hopeful, and that’s exciting because there’s still so many unknowns how it will be next year with the new cars.

“When I put the input into the team and everything I have, if it comes out good I can imagine it will be really rewarding.”

The 32-year-old also referred to the “stability” he will have from what has been revealed to be a three-year contract, which means he does not have to face the perennial worry he had at Mercedes of whether his annual deal would be renewed.

Four times since his arrival from Williams he was offered an extension to his tenure but not on the fifth occasion, with Mercedes having chosen to promote George Russell instead.

“It’s been intense and it’s been crazy actually to think it’s been five years – it went like this [snaps fingers],” said Bottas.

“It will be my 10th season in Formula 1 next year. There have been good times, hard times for sure.

“This sport is quite consuming, especially when you’re at the top, and always been kind of on the knife-edge every year with your contract and so on, so it feels really good to have stability and I look forward to the future.”