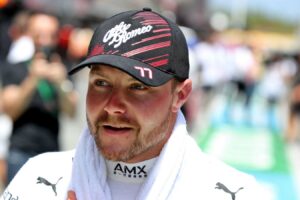 Valtteri Bottas says Alfa Romeo’s number one priority is to improve their reliability having seen their early season form slip away.

Having finished within the points in five of the opening six races, Bottas has now gone on a run of four consecutive grands prix without finishing in the top 10.

This has meant that both he and his team Alfa Romeo have slipped down the Drivers and Constructors’ standings respectively.

Last time out at Silverstone, it was another pointless race with Bottas’ team-mate Zhou Guanyu crashing in the first lap and the Finn also retiring due to a gearbox issue.

Speaking to F1.com, the 32-year-old said the main priority for the team was overcoming the issues that have prevented them from scoring “a big amount of points.”

“Yes, it was big one,” he said of Zhou’s crash. “The main thing is he is fine. It was a big shunt, and I’m glad that nothing serious happened and that he has already been cleared by the FIA.

“After that, with the restart there were lots of opportunities today but unfortunately we had some issue with the gearbox so I ultimately had to stop to prevent further damage. It was unfortunate because we had good pace and we could have scored a big amount of points.”

“It’s for sure the main priority for us at the moment – we seem to have quite a few issues so we really need to solve it because race pace was good and I was making good progress.”

Zhou is also looking to put his unfortunate race weekend behind him and said that despite his big crash, he is “keener than ever to get back on track.”

“It was a big crash and I’m glad I’m okay,” Zhou said via an Alfa Romeo press release.

“The marshals and the medical team at the track were fantastic with their quick response.

“I also owe my thanks to the FIA and Formula 1 for all the work they have done, and they keep doing, to improve the safety of our cars.

“The Halo saved me today and it goes to show every step we take in improving our cars has real, valuable results.

“I’m keener than ever to get back on track and do what I love,” he said. “I’m fit and I’m looking forward to Austria.”

Alfa Romeo are sixth in the standings while Bottas is eighth and Zhou 16th.