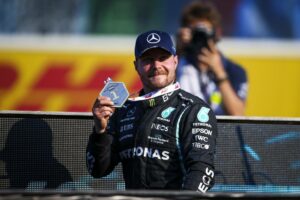 Valtteri Bottas is aware he needs to look back on his Mercedes career with fondness despite not winning a World Championship title.

The Finnish driver is moving on to pastures new with Alfa Romeo and has already been appointed the ‘team leader’ by new boss Frederic Vasseur.

But before he gets stuck into his new role, Bottas has continued to reflect on his time with Mercedes, a five-season stay which returned zero World Drivers’ Championships.

However, he was always up against a mighty challenge in the form of Lewis Hamilton on the other side of Mercedes garage, and so he is taking some pride from the fact that he managed 53 podiums, 20 pole positions, 10 victories and playing his part in delivering another five Constructors’ titles to the Silver Arrows.

Our success since 2017 wouldn’t have been possible without you Valtteri.

And even though you’re leaving, you’ll always be part of the Mercedes family. 💙 pic.twitter.com/EhFai11Oyx

“I think it’s a bit of both,” Bottas told The Race when asked if he was frustrated he could not beat Hamilton on a regular basis or happy to have at least managed it on some occasions.

“The biggest thing is for me it feels a bit of a failure that I couldn’t win a title in these five years with Mercedes and Lewis always manages to win it.

“But in that sense, Lewis is the best driver in Formula 1 history. Knowing that sometimes I can beat him, it’s a nice thing.

“You always aim for perfection and if you’re not perfect, you can’t be happy. So that’s what it is.

“But I’m sure when I go ahead with a different team, I think I’ll have a different kind of perspective when I’m outside this team, that there’s so many things that I can definitely be proud of.

“I need to be proud. And I need to try to be positive as well.”

Bottas also said he experienced somewhat of a rollercoaster of emotions during his time with Mercedes, but ultimately he still enjoys Formula 1 and all the challenges that come his way.

He added: “It’s been quite up and down, and sometimes it’s for a short term. Sometimes it can be for a longer term – like, months.

“I’m still here, still pushing on and still enjoying it.”