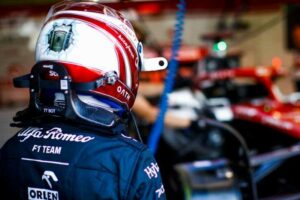 After yet more reliability problems in Friday practice, this time in Monaco, Valtteri Bottas joked about skipping the sessions altogether.

Bottas came into the Monaco race weekend with high hopes, that target of a podium finish very much still on the agenda for Round 7 of the 2022 season.

Such a result may still be possible, though the Finn was forced to make up for lost time for the fourth race weekend in a row when the MGU-K in his Ferrari power unit called it quits.

Unable to set a lap time in the opening session, an MGU-K and gearbox replacement was needed to get Bottas out onto the track for FP2, a session fortunately free of interruptions as he went on to finish P13.

Bottas was still in good spirits after FP2, revealing that he had shared a joke with Alfa Romeo team principal Frederic Vasseur, about only showing up for the next race in Azerbaijan once Friday practice was finished.

Alfa Romeo have explained why Valtteri Bottas isn't on track.

"We are investigating an issue which means we have to remove the PU and Box."#F1 #MonacoGP pic.twitter.com/Z0IKxi8AS0

“I told Fred already that for Baku I should maybe come on Friday night,” Bottas joked, in conversation with Motorsport.com.

“I mean, it’s unlucky. And another completely different issue, the MGU-K. I think the same issue in the same session happened to Mick [Schumacher], but I don’t think there were any in FP2. I’m sure they’re on it. I don’t know the cause.

“So not much we could do. I don’t think we can afford that many issues any more. And it’s still a long, long season to go. So let’s see.”

If a driver was to pick any race where they could stomach the loss of track time in FP1, Monaco would be right at the bottom of that list, this unique, demanding circuit rewarding driver ability and confidence more than arguably any other stop on the calendar.

So the significance of that FP1 spent on the sidelines in Monaco is not lost on Bottas.

“Definitely you need every lap, and it took took a while in FP2 to get used to it, and I definitely was getting more and more comfortable each lap,” he explained.

“And also with the traffic here, it’s actually not that many clean laps that you get before the qualifying. So hopefully a clean FP3.”

Just to rub salt in the wound, Bottas also picked up a fine of €1000 after breaking the speed limit when he entered the pit lane.

“I got a speeding fine because the MGU-K was still on,” he explained.

“I was on the limiter, but I couldn’t go slower. A bit of a strange one!”

Bottas added that he sees no reason why the C42 can not be a “top 10 car” at the Monaco GP, though he does “definitely need to find more from my side”.

He also echoed the sentiments of various other drivers that the Monte Carlo circuit is more “bouncy” this year with the new, stiffer 2022 challengers, which in Bottas’ opinion makes it “definitely a bit harder than previous years”.

Bottas’ team-mate Zhou Guanyu revealed that he was late starting FP2 because of a “scary” brake failure which he suffered towards the end of the opening session.

“We had some brake failure at the end of FP1, which was scary,” he said.

“It was just after the tunnel, so I was quite lucky. That’s why we appeared delayed [in FP2]. Everything was fixed, and that session was quite smooth.”