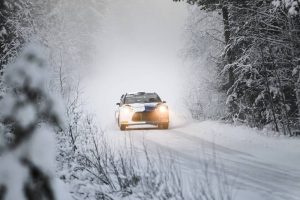 Valtteri Bottas completed an “amazing week” by finishing sixth in the Arctic Lapland Rally – his third straight top-10 result in that event.

The Mercedes F1 driver is naturally a big rallying fan, hailing from Finland, and this is the third consecutive year in which he has taken part in an event held within the Arctic Circle.

Eighth after the first day of action when he trailed leader Juho Hanninen by just under two minutes, Bottas, driving a Citroen DS3 World Rally Car, had improved his placing by two positions at the end of the seven timed stages – reduced from the scheduled 10.

But he and every other competitor fell further adrift of Hanninen who, in a Toyota Yaris World Rally Car, ended up with 2mins 29.2secs in hand of second-placed Teemu Asunmaa.

“We finished 6th overall with Timo,” tweeted Bottas, referring to his co-driver Timo Rautiainen, who guided Marcus Gronholm to two world titles. “That’s our third Arctic Rally finish in a row. So much fun, yet challenging.”

He then thanked a variety of people – Rautiainen, the team who prepared his car, sponsors and tyre suppliers Pirelli – and “everyone involved for the amazing week!”

So much fun, yet challenging 🇫🇮

While Bottas was sixth overall, he nevertheless achieved a podium finish in his class – although in fairness, there were only four entrants in that category.

Nevertheless, it was still an improvement on last year in the outright classification for the 31-year-old, who was ninth in 2020, but still down on his 2019 finishing position of fifth.

Asked before the event to compare rally driving and F1, Bottas told Pirelli: “First of all, rally cars at this level are obviously four-wheel drive, so that makes the driving style quite different and you really need to slide the car sometimes.

“Then you have to drive while you’re listening to someone else. In F1, I would say the driving is more precise because we know the lap, the corner and every single kerb and bump by heart, so it’s really exact. Rallying is more improvised.”

Regarding the temperament required to compete in different disciplines, he added: “I would say it’s a very mental thing. There are physical demands too, but mentally you need the concentration, motivation and the will to always want to improve.