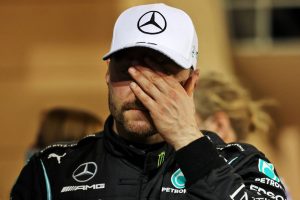 Valtteri Bottas complained his race strategy applied by the Mercedes team had compromised his chances in the Bahrain Grand Prix.

The Finn finished a distant third behind his team-mate Sir Lewis Hamilton and Max Verstappen, who fought out a thrilling duel with the Dutchman having to give back the lead to the World Champion following a pass in which he had exceeded track limits at turn four.

In the end, it was a one-three result for Mercedes to begin the 2021 campaign as they resisted the initial threat from Red Bull and overcame the problems they had encountered during pre-season testing.

Bottas was also hindered massively by a slow second pit-stop on lap 30 when the front right tyre proved difficult to remove, but it was the strategy that occupied his immediate thoughts post-race.

In the past, the 31-year-old has appeared disgruntled that his strategy has simply mirrored that of Hamilton rather than being more risky in the hope of a bigger reward.

A sticky right wheel at VB's stop and he re-joins in P5 – dropping behind NOR and LEC… https://t.co/7vDcNISSdL

“It’s disappointing for sure – the team got good points, which is a good thing, but from my side the strategy was too much on the defensive side instead of attacking, which I was quite surprised of,” said Bottas during his post-race interview.

“We will review everything, but I feel we were more passive than aggressive with the strategy in the end. I wanted to stay out longer in the middle stint on fresher tyres but it wouldn’t have made much difference in the end.

“I also had a slow pit-stop, which took away any opportunities, and in the end P3 was the maximum. But the pace was quite good at times.

“We managed to have two cars with different tyre choices so we could play with the strategy, but from my side I think there should have been more to get today.”

One consolation for Bottas was that he had a window in which to make a late pit-stop and go for the fastest lap, which he achieved in order to add an extra point to his 15 for third position and give him a very minor boost in terms of his quest for a first drivers’ World Championship.

“If you had told us after winter testing we would have got more points than Red Bull today we would have taken it,” added Bottas. “There are positives to take and we move on – it’s still very early days in the championship.”