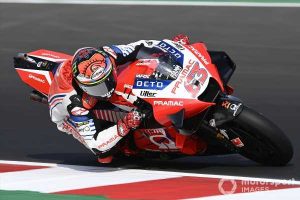 Valentino Rossi says his protege Francesco Bagnaia is riding the Ducati in “the perfect way” at the MotoGP Emilia Romagna Grand Prix at Misano.

Bagnaia scored his debut podium on his return from injury in last weekend’s San Marino GP at Misano, beating Yamaha rider Rossi in the process on his way to second.

The Pramac rider has continued his strong form in the second Misano weekend, setting a lap record to top FP3 and was on course for pole in qualifying with a record 1m30.973s before he had the lap cancelled for exceeding track limits. Bagnaia was dropped to the middle of the second row in fifth as a result.

Rossi – who was seventh in qualifying – followed Bagnaia briefly during the Q2 session and noted that the 2018 Moto2 champion’s style is able to “fix” some of the 2020 Ducati’s issues.

“Pecco is riding very good, because he’s able with his style to use the Ducati in the perfect way,” said Rossi. “He is able to fix some problems the Ducati has. But [he is also] using the maximum of some advantages Ducati has, like the engine and acceleration.

“Ducati is a high-performance bike, but [it] is not easy to ride. So, following Pecco, he rode very, very well, but unfortunately he touched the green [run-off area]. If not, he makes the pole position. And I think tomorrow he will be very strong in the race because he had a very good pace.”

Commenting on his own qualifying, Bagnaia admitted his mistake at the last corner was a result of him being “too hungry”.

“For the qualifying, I make a very, very good lap time,” the Pramac rider said. “In sector three I was very strong and very fast. But, I was too hungry in the last corner and I opened the gas too much and I went wide. In any case the lap time was incredible.