Home » Racing » Tributes paid to the 'Queen of the Nurburgring'

Tributes paid to the 'Queen of the Nurburgring' 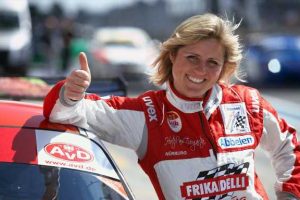 The motorsport world has come together to pay tribute to Sabine Schmitz, who has sadly passed away aged just 51 following a long battle with cancer.

Schmitz was a two-time winner of the Nurburgring 24 Hours and the first and only woman to do so, earning her the title of ‘Queen of the Nurburgring’ following her successes inside a BMW M3 back in 1996 and 1997.

It is widely estimated she drove the iconic circuit over 20,000 times during her lifetime.

She was also a hugely popular figure on Top Gear, with her attempt at breaking the 10-minute barrier at the Nurburgring inside a Ford Transit van one of the most memorable segments on the show.

Schmitz would join the Top Gear presenting team in 2016 and was still a part of the line-up up until 2020.

Schmitz revealed in 2020 she had been battling cancer since 2017 and, on Wednesday, March 17, 2021, the Nurburgring social media account posted to say she had sadly passed away.

‘The Nurburgring has lost its most famous female racing driver,” they said.

“Sabine Schmitz passed away far too early after a long illness. We will miss her and her cheerful nature. Rest in peace Sabine!”

The tributes then flooded in, with Formula 1 also releasing an official statement.

“We are all deeply saddened to hear that Sabine Schmitz has passed away,” said Formula 1 in a statement.

“An incredible talent and wonderful person who made us all smile. Our thoughts are with her family and friends at this sad time.”

This Sunday’s upcoming episode of Top Gear will be dedicated to Schmitz.

“Sabine was a beloved member of the Top Gear family and presenting team since 2016, having first appeared on the show in 2004, and everyone who had the pleasure of working with her on the team is in shock at this news,” Clare Pizey, executive producer of Top Gear, said via the BBC.

“Sabine radiated positivity, always wore her cheeky smile no matter how hard things got – and was a force of nature for women drivers in the motoring world.

“Like everyone else who knew her, we will truly miss her – Sabine really was one of a kind. Our thoughts are with her partner Klaus, who was always by her side and who we welcomed to Dunsfold many times, and her family in Germany.”

All three former Top Gear presenters, Jeremy Clarkson, Richard Hammond and James May, were amongst those to pay tribute to her.

Terrible news about Sabine Schmitz. Such a sunny person and so full of beans.

Very sad to hear of the passing of Sabine Schmitz, a proper driving legend who’ll be sadly missed by many. The Ring has lost its Queen. RIP

I never thought car makers should be at the ‘Ring, but I always thought Sabine Schmitz should, and would, be. Rotten news. #RIP

Pioneer, champion, Queen of the Nurburgring

Sabine Schmitz was a unique, much-loved and cherished member of our sport's family, and a force of nature for inspiring a new generation of motorsport enthusiasts

Our thoughts are with her family and friends at this sad time pic.twitter.com/nwrLyZvXla

We’re incredibly sad to hear of the passing of Sabine Schmitz.

A fierce competitor, talented racer and Queen of the Nürburgring, who shared our passion for driving fast.

Our thoughts and heartfelt sympathies are with her family and friends. pic.twitter.com/wGY9siZ4vx

Sabine Schmitz was an inspiration to many, she was fast, funny, and quite simply, an amazing woman. The 'Queen of the Nürburgring', taken far too soon.

Rest in peace, Sabine. You will be dearly missed.