‘Transformation’ in Chase Briscoe leads to promotion to Cup 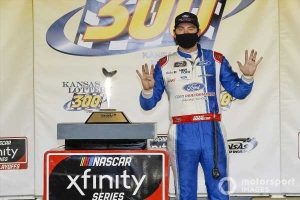 Chase Briscoe’s NASCAR journey has been anything but easy but despite the struggles it continues to be highly rewarding.

On Tuesday, Stewart-Haas Racing confirmed that the 25-year-old Briscoe would be promoted in 2021 to drive the organization’s No. 14 Ford car in the Cup Series, replacing veteran Clint Bowyer, who moving to the Fox Sports broadcast booth next season.

HighPoint.com, a customer service and technology solutions company that first began sponsoring Briscoe late last year, will serve as the anchor primary sponsor of his No. 14 car in Cup.

“In the final three races last season, we saw a confidence in Chase that we hadn’t seen before,” SHR co-owner Tony Stewart said. “There was a transformation, and I think those three races last year were a preview of what we were going to see this year.

Briscoe has won a series-best nine races so far this season in the Xfinity Series and currently leads the playoff standings heading into Saturday’s race at Texas Motor Speedway. He is already guaranteed to be one of the four drivers competing for the series title in two weeks at Phoenix.

Briscoe is a third-generation racer whose career began on dirt tracks in and around his home state of Indiana. He began racing in sprint cars and at the age of 13 and became the youngest driver to win a 410 sprint car race, breaking the record set by NASCAR Hall of Famer Jeff Gordon by one year.

He continues to race occasionally on dirt, entering his own midget car at this season’s Chili Bowl Nationals in January.

“I raced with Chase’s dad in USAC sprint cars and in non-wing cars, so to see Chase come up through the ranks like I did brings back memories,” Stewart said. “When it comes to the No. 14 car, I obviously have a passion for having dirt drivers behind the wheel.

“Having had Clint Bowyer in the car and now Chase, it’s special, but also practical. With the lower horsepower package they have in the Cup Series, you have to run these cars a lot freer, and I think that suits a driver with a dirt background. Chase is a guy who would much rather have a loose racecar versus a very tight racecar that won’t turn.

“I always felt better in a Cup car than I did in an Xfinity Series car, and I think he’ll be in the same position.”

In his relatively brief stock car racing career, Briscoe won six races and the ARCA Menards Series championship in 2016; he’s won a pair of races in the Truck Series and finished sixth in the series standings in 2017; and he has 11 Xfinity wins in 80 starts dating back to 2018.

“Growing up in Indiana and racing sprint cars, the guy I always looked up to was Tony Stewart. To be able to drive for him is a dream come true,” Briscoe said. “Tony and Gene (Hass) have built something really special in Stewart-Haas Racing. Being a part of it in the Xfinity Series and now, the NASCAR Cup Series, has always been my goal.

“HighPoint and Ford created this opportunity, and my parents, my wife, and Briggs and Beth Cunningham, helped position me for this opportunity. Their support means everything, and it’s all the fuel I need to compete at the Cup level.”