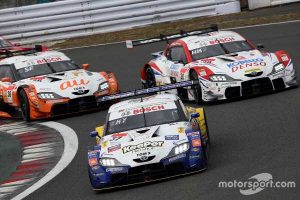 Toyota has revealed its driver line-up for the 2021 SUPER GT season, meaning the full GT500 grid for the new campaign is now known.

The Japanese auto giant is once again entering six Toyota GR Supras in the top class of the series following its near title miss in 2020.

Fenestraz takes the seat that had been occupied since 2017 by Nick Cassidy, who is leaving the championship to participate in Formula E with Envision Virgin Racing.

Sho Tsuboi meanwhile moves to replace Fenestraz in the #36 TOM’S car after spending a season alongside Oshima in what was effectively Cerumo’s second car in 2020.

Rookie Racing has also got a new title sponsor in the form of petrol brand ENEOS, a former sponsor of Team LeMans, which replaces chemical brand Wako’s.

The remaining three line-ups within the Toyota are unchanged from last year.

Five of the six Toyota entries are on Bridgestones, with Racing Project Bandoh maintaining its long-standing association with Yokohama.

Toyota has also announced that three of its GR Supra GT300 machines will be on the grid this year, following Thursday’s news that LM Corsa will be using the car in 2021.

Joining LM Corsa and Saitama Toyopet in running the JAF GT300-spec car is Max Racing, which like LM Corsa is switching away from the increasingly out-of-favour Lexus RC F GT3.

However, the Lexus brand will remain on the grid via K-tunes Racing, which is running an unchanged line-up of Morio Nitta and Sena Sakaguchi.

Elsewhere, apr will continue to field its pair of GR Sport Prius PHVs. Hiroaki Nagai and Manabu Orido remain a pair in the #30 car, while Koki Saga and Yuhki Nakayama pilot the #31.

A seventh Toyota entry was listed as TBA, but using the #35 that has been the preserve of the Team Thailand squad and its Lexus RC F GT3.

However, it’s not known if Team Thailand or its 2020 drivers, Sean Walkinshaw and Mathias Beche, will be back for another season.