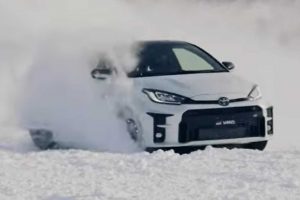 This is how you drift a hot hatch.

The Toyota GR Yaris has one of the most powerful production three-cylinder engines in the history of the automotive industry. The three-door hot hatch is much more than just a potent engine though, as it features many performance upgrades over the standard Yaris. In fact, it is based on a combination of Toyota’s GA-B and GA-C platforms, which is a very rare phenomenon in the industry.

Built to homologate the brand’s WRC race car, the performance hatch is one of the most capable small cars on the market today. Unfortunately, it’s not available in the United States but customers in Europe and some Asian countries can enjoy near WRC experience in a production vehicle.

So far, Toyota has been pretty vocal about how cool the hot hatch is. It released a number of ads for the different regions where it sells the car – and some of them were provocative, to say the least. There’s a new promotional video for the Japanese market and it shows the GR Yaris drifting on snowy terrain.

In fact, this is more than just an advertisement for the performance hatch. Unfortunately, our Japanese is not good and we can’t tell you the exact words of the driver, but this clip is more of a short educational course on how to properly drift the GR Yaris in the snow rather than just an ad. Drifting is an international language though, so you can probably figure out most of the guidance by simply watching the test pilot and his exact movements.

Needless to say, these maneuvers should be performed only on a closed course. There are other exercises for GY Yaris drivers that are more appropriate for public roads though.