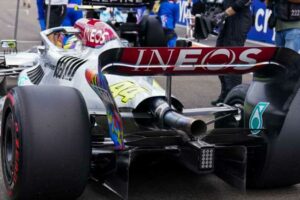 With Mercedes still unable to eradicate their porpoising problems, Toto Wolff says he “wouldn’t discount” the team reverting to the specification they ran at the opening Bahrain test.

That means a W13 with fatter sidepods.

Mercedes ran two very different sidepods during the two pre-season Bahrain tests, the first being an almost standard bulge and the second being their zero-pod.

They opted to race the zero-pod design in the opening five races of this championship but it is said to be hindering the team’s efforts to resolve their bouncing.

As such Wolff admits in time they could revert to the fatter sidepods.

“Well, I wouldn’t discount anything,” he told The Race, “but we need to give all of our people who have produced great racecars in the past the benefit of the doubt, and we believe this is the route to go down.

“Barcelona [the next race] is definitely going to be a point in time when we are able to correlate with what we’ve seen in February [in the first test there with the old concept] and gather more data.

“I’m also annoyed by always saying the same thing a lot: gathering data and making experiments. But it’s physics and not mystics.”

The Mercedes motorsport boss does, however, believe that old spec is “much slower on paper”.

We maximised the result that was possible today and both drivers did a good job to score good points for the Team – but we have to feel for Lewis who had even more bad luck with the Safety Car.

Onwards to Spain. And another chance to make a step forward. 👊 pic.twitter.com/qwKeeLD41R

For now, though, the team will stick with the current spec with its zero-pod design.

“We’re not looking at the lady next door and if we like it more or not, because it’s still good,” Wolff added.

“As a matter of fact, we need to understand – before you make a decision to switch to another concept – where did this one go wrong?

“And that is a question you can only respond to yourself, but I would be asking ourselves to get an answer after Barcelona, because that’s the real correlation we have.

“And by then, we’ve got to look at ourselves in the mirror and say: ‘did we get it wrong or not?’.”

Fifth and sixth at the Miami Grand Prix with George Russell finishing ahead of Lewis Hamilton, Mercedes are 62 points behind Ferrari in the Constructors’ Championship.

“It’s clear that there is potential in the car, which is fast,” Wolff added, “but we just don’t understand how to unlock the potential.

“It’s a car that is super-difficult to drive and on the edge, dipping in and out of the performance window – more out than in.

“And dissecting the data with a scalpel is just a painful process because it takes a very long time and as a matter of fact the data sometimes doesn’t show what the drivers tell us.

“But the data doesn’t show these big swings. We haven’t had this situation before where it just doesn’t correlate what we see on the screens with what the driver feels.

“That’s making it even more difficult.”