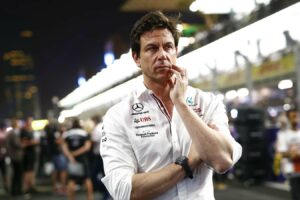 Mercedes team boss Toto Wolff has said he can see the team in a similar situation to where they were in 2013, in the chasing pack behind the leaders.

Red Bull and Sebastian Vettel were the dominant force in the final year of the V8 era, and Mercedes found themselves locked in a battle for ‘best of the rest’ with Ferrari and Lotus at the time.

Nico Rosberg and Lewis Hamilton did manage three race victories between them and, although they managed to pip their rivals to P2 in that season’s Constructors’ Championship, they were a huge 236 points behind Red Bull come the end of the season, such was that car’s advantage over the rest.

Wolff said the Silver Arrows continued to give their all despite their deficit to those at the front and, while he sees their current performance level as “unacceptable”, the thrill of the fight will motivate them.

“I love competition and I’ve always loved competition,” said Wolff, as per RaceFans. “We had a really strong run of eight years where we were leading the pack, not always, but we kind of managed our way into the lead.

“This time for me feels a little bit like 2013, where we just weren’t up to the speed with the Red Bull and probably also not with the Ferraris but we kept fighting. This is how I feel at the moment.

“It’s certainly totally unacceptable where we are in performance. We are third on the road and sometimes not even [that], like today. It’s just not an option to stay where we are.”

Mercedes’ head of trackside engineering Andrew Shovlin previously spoke of the team’s issue with ‘porpoising’ and how it has effectively halted the team from knowing how fast their car could be, and won’t quite know where they stand until they fix the bouncing effect.

He told Motorsport.com: “That’s probably priority number one because that’s ultimately preventing us from running the car where we’d like to run it for optimum performance.

“What we don’t know is, if we could just magically make that issue vanish, where would we actually be in terms of car pace: is the car fast enough or not? And it’s very difficult to answer that question.”