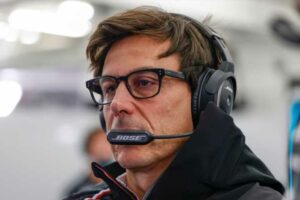 Mercedes boss Toto Wolff has revealed the drivers are lifting off on the straights in order to combat porpoising as their 2022 problems continue.

The team’s difficult start to the 2022 season did not look like it was coming to an end any time soon during the first practice session of the Emilia Romagna Grand Prix as both drivers finished well off the pace.

George Russell came in 10th while his team-mate Lewis Hamilton was all the way down in 18th with only Zhou Guanyu and Nicholas Latifi behind him.

What is even more worrying for Mercedes is the gap between themselves at the front of the grid. Charles Leclerc topped the session with a time of 1:29.402, 4.860 seconds ahead of Russell and 7.062 seconds ahead of Hamilton.

Team boss Toto Wolff has admitted porpoising remains a problem with the W13 and said they were being forced to lift off on the straights.

“Lewis’ porpoising is not the worst actually,” the Austrian said.

Useful #FP1 in challenging conditions, with plenty of data to delve into before Quali 👊🌧️ pic.twitter.com/6bFIyuP5GD

“We had George bouncing so much that he broke the stay on the floor. We have to lift on the straights.

“I have never experienced bouncing like this in my life. It’s undriveable.”

While Ferrari also appeared to be showing signs of porpoising, it did not seem as impactful as Mercedes’. Wolff said it looked as if the Ferrari car was stabilising better when the brakes were hit.

“Their porpoising looks a little bit different to ours,” Wolff said of the Ferrari.

“Our frequency looks higher and the main difference is that when they hit the brakes the car stabilises and ours does not.”

Having won the past eight Constructors’ Championships, Mercedes’ quest for the ninth has not got off to the best start. They are second in the standings but the 39-point gap between themselves and leader Ferrari suggests their car is not ready for a championship fight.

Despite this, Wolff remained optimistic and said the team could fight for the title once the “potential” of the car is unlocked.

“I think if we can unlock the potential of this car then we can fight for the Championship,” the 50-year-old said. “But when you see the gaps like we have seen today then [that target] is totally unrealistic.

“But we just keep continuing on and trying to understand [the issues].”

With teams bringing upgrades to their car this weekend, Mercedes chief strategist James Vowles admitted in the week that their goal is to at least “keep up” with their rivals.

“When we get back to the European season,” the Mercedes’ chief strategist James Vowles said in a video posted on the team’s YouTube channel, “teams would generally bring more performance upgrades, and I suspect you will see an evolution of our competitors and we need to make sure we, at the very minimum, keep up with that.”