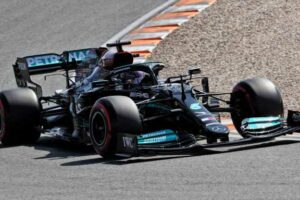 Mercedes boss Toto Wolff said Lewis Hamilton took the car beyond its limits to qualify within 0.04s of Max Verstappen at Zandvoort.

The home crowd favourite Verstappen was the clear candidate for pole heading into qualifying, and he rose to the occasion under the pressure to secure that P1 grid slot.

What was more surprising though was Hamilton’s lap, with the Briton falling just 0.038s short of spoiling the Dutchman’s party on home soil.

Hamilton will though share the front row with Verstappen for the Dutch Grand Prix, after a lap in which he “outperformed” the W12, according to Wolff.

Valtteri Bottas in the other Mercedes will start from P3.

“I think we need to be satisfied with where we ended up,” Wolff told Sky F1.

“Lewis missed out a lot yesterday on running, and at the end he put one lap together and we are P2 and P3, that is a good starting point.

“I think he outperformed the car, that was a mega lap.”

The last time Verstappen and Hamilton shared the front row at was Silverstone, leading to that controversial first-lap crash at Copse corner.

So Wolff is desperate to avoid a repeat, especially in front of a Dutch crowd.

“I think if something were to happen tomorrow, even if we were not at fault, they would be flaring those orange things at us,” said Wolff with a hint of sarcasm.

But on a more serious note, Wolff was keen to praise the Dutch fans for the atmosphere they have created, believing they and all Formula 1 fans are gripped by these title battles between Hamilton and Verstappen, alongside Red Bull versus Mercedes.

“They were super fair the public, there was no booing, and it’s just a great atmosphere here, so let’s hope for a great race,” said Wolff.

“You can see that even here [in] the ambience that it’s such a close fight between these two [Verstappen and Hamilton] and the two teams, and then you have people like [Pierre] Gasly [who qualified P4] today just being there.

“And I think it’s just very exciting to follow.”

A shock Q1 elimination for Sergio Perez means Verstappen is all alone at the front against Mercedes, which Wolff believes gives his team a strategical advantage, as long as they can keep their performance level up.

Surviving on a one-stop is the more obvious option, but Wolff talked up the appeal of a two-stop also.

“I think if we are able to have the same pace in the race, it’s going to be about survival on a one-stop, Max needs to make a decision,” said Wolff when asked if Mercedes have the advantage on strategy.

“And I think we can play both strategies tomorrow and suddenly you can have two cars that can actually go totally different.

“Pitting one, undercutting, massive pressure, leaving the other out and then finishing one and two.”