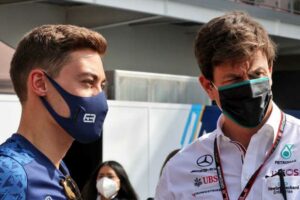 Toto Wolff has said he believes Lewis Hamilton and George Russell are racing as “team-mates should” so far in 2022.

Wolff has plenty of experience when it comes to team-mate rivalry boiling over. Hamilton and Nico Rosberg’s battle for supremacy in the team’s garage, as well as over World Championships defined Wolff’s early Mercedes career and threatened to split the team.

Wolff went as far as to say he would have dropped the drivers had the feud escalated and that he would never again allow the drivers’ hostility towards each other to create a toxic work environment.

So when Russell replaced Valtteri Bottas for the 2022 season, all eyes were on the team to see how the new dynamic would unfold.

Russell had been touted as a more aggressive team-mate for Hamilton than Bottas and perhaps one that would not be willing to settle for second place. Ralf Schumacher commented that the young Brit was a “different calibre” of team-mate than Bottas.

Wolff himself always seemed pretty confident the new partnership would be closer to Hamilton-Bottas than it was Hamilton-Rosberg, but what the Mercedes team boss would not have anticipated was neither driver competing for race wins at the start of the season.

In a car that looks a shadow of the ones that came before it, Russell has excelled and has more points on the board than the seven-time World Champion, and his time at Williams seems to have been the perfect education on how to get the most out of an underperforming car.

In Miami, the two were seen battling for position for the first time but Wolff said he was happy with how they interacted.

“He has integrated very well,” Wolff said of Russell, as reported by GPFans.com.

“It is almost like he has been here forever and I’m really happy about the two of them, how they interact, how respectful they are about each other.

“Even the situation on Sunday where they raced each other and it was getting a bit ‘I’m not leaving any room’ and then ‘Okay, I’m going to find another way and get the position back’.

“I think this is how the two of them as team-mates should race each other. So I am happy how he has settled in.”

While Wolff is happy with how things are going, Schumacher has commented that the way Russell is able to handle problems is going to “bother” Hamilton.

“[Russell] kind of outweighs Lewis a little bit in every way. He can just handle it better and that bothers Lewis, I’m pretty sure,” Schumacher suggested.

“That’s clear, he’s an egotist after all, as we all were as racing drivers, and I was as well, I admit that. In any case, I must say, it will bother him. One hundred percent!”