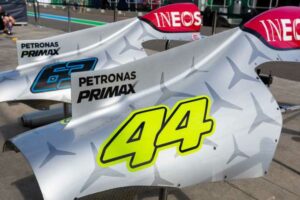 Toto Wolff has explained that Mercedes aren’t bringing any substantial upgrades to the track any time soon as they’d just be “confusing” themselves even more.

After eight seasons of dominating Formula 1, taking seven Drivers’ titles and winning an unprecedented eight successive Constructors’ Championships, Mercedes are on the back foot this season.

With all new technical regulations in play, Mercedes went for an extreme design when it came to their W13’s sidepods, dubbed zero-pods, and that, it has been said, is compounding their porpoising issues.

The Brackley squad has suffered more than most with bouncing on the straight, a consequence of using ground effect aerodynamics to create downforce.

While the team tried to shave pieces of their floor off in a bid to reduce it, that hasn’t worked as they are trading one loss of downforce for another.

And their zero-pods aren’t helping, as the slim design means there is less bodywork to hold the floor in place when the porpoising kicks in.

🗣 "We have to try and find a level of the bouncing, as hardcore as we can go without rattling our brains out."

Lewis Hamilton gives his views on an improved qualifying performance, Mercedes porpoising and how the team can return to the front 🏎💨 pic.twitter.com/K8kvKnO6Bc

But despite their troubles Mercedes won’t be introducing a significant upgrade any time soon.

“Nothing we did this weekend [in Australia] has unlocked the aerodynamic potential or has reduced the bouncing. We’re still at the same place.

“And that’s why it doesn’t make any sense to bring updates, because you’re confusing yourself even more.

“Maybe it’s the fact the more downforce you bring, the worse the bouncing gets. So we are still learning.”

George Russell revealed after his P3 at the Australian Grand Prix that Mercedes did not have any big upgrades in the pipeline.

Instead, said the Briton, they’d be running a few “little things” in the hope that it will bring them performance in the coming races.

“Unfortunately there’s nothing substantial in the pipeline anytime soon,” he said “It’s not going to happen overnight, it’s going to take a number of races.

“I think there’ll be little things, there’ll be incremental steps but we recognise that our rivals are going to be doing the same so it may not be clear to the outside world that we’ve made progress because Ferrari and Red Bull are going to be making progress as well.”

Russell heads to Imola for round four of the campaign sitting second in the Drivers’ Championship, 34 points behind Charles Leclerc, while Mercedes are P2, 39 points adrift of Ferrari.