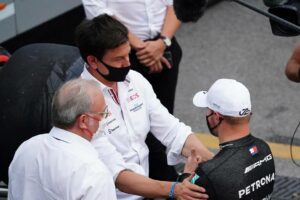 Toto Wolff is unsure about Valtteri Bottas’ assertion that he would have been helped by having a longer contract at Mercedes.

Instead, the team principal feels the Finn has simply found the going tough up against a seven-time World Champion team-mate in Lewis Hamilton.

Bottas is moving on at the end of this season to Alfa Romeo, with Mercedes having decided for the first time since he joined them in 2017 not to renew his one-year contract for the following campaign.

A disappointing first 11 races of 2021 meant George Russell was preferred to Bottas for 2022 and since the decision was announced, there has been an improvement in the performances of Hamilton’s ‘wingman’.

That may well have something to do with the pressure about his future being removed, with Bottas having a multi-year contract at Alfa Romeo tied down and saying recently: “Toto thinks pressure is good for me.

“I agree, pressure for a certain length of time is good and can get more out of you, but if you have pressure contractually for nine years of your Formula 1 career, year by year, it starts to eat you from inside, you know?”

However, Wolff has responded by suggesting that rather than feeling contract pressure, Bottas has experienced Hamilton pressure.

“I think Valtteri has been in a pressure cooker since the beginning of his single-seater career,” said the Austrian, quoted by Motorsport.com.

“Would a multi-year contract have been better? With hindsight, you can always have a different opinion.

“I still think he’s a great guy and a fast driver. But I also think spending years with Lewis can put a lot of pressure on him.”

Although Bottas finished second to his colleague in the Drivers’ World Championship in 2019 and 2020, on neither occasion was he able to sustain a prolonged challenge in the way Max Verstappen has this year.

Wolff recognised there are “oscillations” in the 32-year-old’s performance, examples being a serene victory at the Turkish Grand Prix compared to other races where he has become entrenched in the midfield.

“But sometimes there are oscillations and I wonder if it’s due to pressure or anything else.

“Maybe it’s the consequence of having Lewis Hamilton, a seven-time World Champion, as a team-mate. There is nobody else in the 100-win club, he is the only one.”