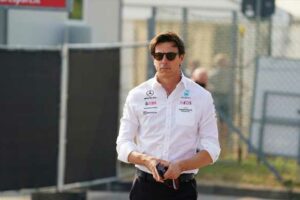 Toto Wolff says the belief that he didn’t want Alex Albon to join Williams and tried to block the move is a “misunderstanding.”

The current Red Bull reserve driver is to join the British team next season, replacing George Russell who is off to join Wolff at Mercedes in place of Valtteri Bottas.

Before the move was confirmed, Wolff stated that the Thai driver would have to officially be off Red Bull’s books for next year if he wanted to join, and tried to get Mercedes reserve and Formula E driver Nyck de Vries the seat instead.

However, the Austrian has denied not wanting Albon to join the team and claims that he and Mercedes didn’t have any say in the matter anyway.

“There seems to be some misunderstanding,” he told Channel 4.

“I think Alex absolutely deserves to be in Formula 1, he’s a great personality, and we have no say and didn’t even want to interfere. From my time at Williams, I think every team should have the authority to decide upon the right driver.

“For me, it was simply understanding what needs to be done to protect our IP and confidentiality.”

Wolff recently stated that he’d like to see teams be allowed to field three cars in the future, with the third having to be driven by a youngster, to help give rookies more chances to join the sport.

His proposal didn’t prove particularly popular, with both Christian Horner and Jost Capito expressing doubts over the financial feasibility of such a change.

He has doubled down on his support for it though, believing that it would not only give more young drivers opportunities but would create interesting storylines too.

If the sport can find a way to make three-car teams financially viable, he wants it to happen, and if not, he’d like to see race weekends where only juniors could compete.

“I think it would be awesome to have a mandatory young car in every single team, or at least mandatory race weekends for young drivers,” he added.

“That would create a lot of narrative, maybe there is one that comes in with a surprise and challenges the big boys.

“So if we can find a situation in the budget and the cost cap then I would be absolutely up for it.”