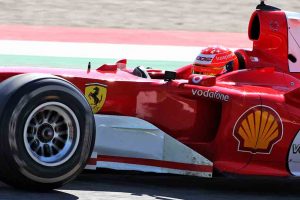 Jenson Button has said he has sympathy for Mick Schumacher and the fact that people will continue to compare him to father, Michael.

There is always a buzz around Mick Schumacher given the iconic surname and 2020 is proving no different, especially with him leading the Formula 2 World Championship and seemingly heading for a Formula 1 seat in 2021.

To prepare him for that, he is reportedly being lined up for an FP1 outing at the Eifel Grand Prix weekend, due to take place at the Nurburgring on October 9-11.

The Ferrari academy driver certainly has some big shoes to fill following in the footsteps of a seven-time World Champion, but Button thinks Mick is deserving of a place in Formula 1 amid “totally unfair” comparisons to his father.

“People are always going to compare him to Michael and I think it’s totally unfair. He is a different person and a very different animal to Michael.

“He really does seem like a lovely kid. He seems to have a great ethic which Michael definitely did have and he has grown over the last couple of years in F2.

“I think he does deserve a seat in F1, then we can really see what he has got then when he has got some proper pressure.”

An amazing moment on Sunday at Mugello 👀@SchumacherMick takes to the track in his father's title-winning @ScuderiaFerrari F2004 😍#TuscanGP 🇮🇹 #F1 pic.twitter.com/ACxZ7p3dQd

Mick Schumacher gave everyone a real treat before Ferrari’s 1000th Grand Prix at Mugello, driving his dad’s dominant F2004 complete with screaming V10 engine – an experience he is very grateful for.

“Obviously driving the Ferrari F2004 on Sunday was a very special moment for me,” he said.

“It’s such a great car and in my opinion one of the best ones in the history of F1. And driving it on a track like Mugello where the F2004 had done so many laps before made it even more special for me.”

“The sound, the downforce, the steering – it’s just amazing.

“It was really special for everyone involved, I think also for the mechanics who worked with my dad on this car 16 years ago. A great moment for me and I’m very thankful that I got this opportunity by Ferrari.”