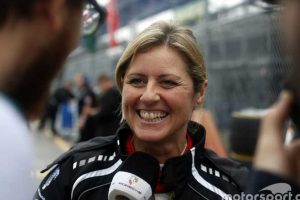 Clarkson, Hammond, May, and other past presenters return.

Sabine Schmidt was 51 when she passed away from cancer after fighting for several years. The tenacious German racing driver didn’t let her affliction stop her from smiling or spending time behind the wheel of cars on the Nürburgring. During her racing career, Sabine Schmidt won the Nürburgring 24 hours and spent much of her personal time lapping the Ring.

According to Top Gear, we can expect the following presenter lineup for the tribute, “The specially-produced programme will see Top Gear’s current presenters – Freddie Flintoff, Chris Harris, and Paddy McGuinness – joined by former hosts Jeremy Clarkson, Richard Hammond, James May, Rory Reid, and Matt LeBlanc, as well as guests such as David Coulthard, Susie, and Toto Wolff, and Jess Hawkins.”

Sabine’s skill and bright personality are unforgettable and her appearance on Top Gear training Jeremy Clarkson to improve Ring lap times in a diesel Jaguar is unforgettable. A time she quickly beat in a van proving there is no substitute for driver skill. Visitors to the Nürburgring also had the opportunity to ride with Sabine through BMW’s Ring Taxi program where she would drive tourists around the Ring in BWM’s latest M cars.

This will be the first time all Top Gear hosts will come together on the BBC program. This is not a time for TV show politics but rather an important fo remembrance for an important member of the Top Gear family.